Though Kapil has landed in soup quite a few times for his tweets, this time his hilarious reply to a hater will surely leave you in fits of laughter

However, to stay away from controversies, Kapil deleted his tweet later. 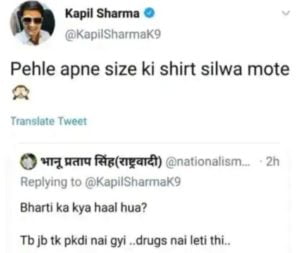 Recently, NCB had carried out a raid at Bharti Singh’s residence and seized ganja from her possession.

During interrogation, Bharti and her husband Haarsh Limbachiyaa admitted to consuming drugs.

The couple was sent to judicial custody and was later granted bail.