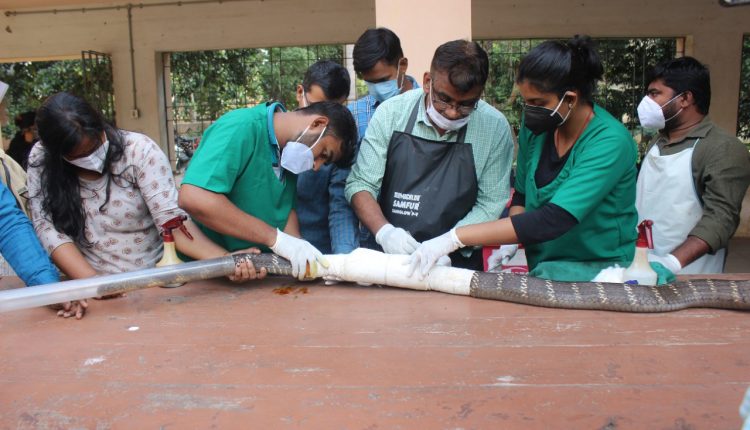 Bhubaneswar: A king cobra, which was undergoing treatment of its fractured ribs, at OUAT, here, has recovered from the injuries.

The Snake Helpline members had brought the injured 12-ft snake from Chilika to the Odisha University of Agriculture and Technology (OUAT) on December 24 last year for treatment. A team of experts of OUAT, including Assistant Professor Dr Siddhartha Shankar Behera, conducted an X-Ray, which revealed that the snake’s four ribs had been broken.

On December 30, Prof Indramani Nath and his team applied plaster on the broken ribs of the king cobra. Later, the team with the help of Snake Helpline members put both sides of the plastered parts of the snake inside a cushioned PVC pipe so that it would not injure itself due to mobility.

On Friday, Prof Nath and his team removed the plaster from the snake’s body and took another X-Ray of the injured part. The king cobra was released in the open and its movements were observed by the team of veterinarians.

“The snake is now totally fit and healthy. But we have to keep it under observation for 3-4 days before releasing it in forest,” said Prof Nath.

It may be noted that the king cobra was spotted in the garden of Rinku Biswal’s house at Chilika square near Balugaon in Khurda district. Before the Snake Helpline volunteers, on being informed, could start their rescue operation of the cobra, somebody threw a brick on it. As a result, the snake was badly injured.

Snake Helpline volunteer Bapi Mishra found blood on the snake’s body and informed secretary of the Helpline Subhendu Mallik, who visited spot. On finding a depression on one side of the snake, Mallik brought the snake to OUAT.