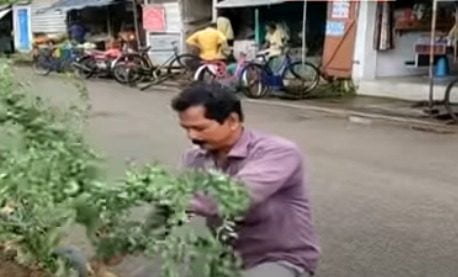 Polasara: We all watch advertisements related to global warming, air pollution and importance of plantation on television, newspapers and social media sites. We do nothing by ourselves voluntarily but make lame excuses by shifting the responsibility on to the government.

Here is a man from Polasara in Ganjam district who spends money generously for planting trees to beautify the town. The green activist is none other than Padmanabha Pradhan, also called The Tree Man Of Polasara.

Padmanabha has planted more than a thousand trees along a three-kilometre stretch beside the roads and dividers in the past four years. He thinks plantation is a social and moral responsibility. He waters the plants on a regular basis after planting them. He weeds out grass around roots, fences the trees to protect those from goats and cattle.

“I have been planting trees to turn Polasara into a green zone and to ensure climate control on the geography. Trees affect our climate and therefore our weather. They modify our temperature, energy usage and reduce air pollution. Trees around the city have grown to a respectable height between 5-ft and 8-ft. I have never accepted any aid from the government or volunary outfits,” said Padmanabha.

“He loves plants more than anything else. He has done everything for the town with his own resources. People should support and encourage him in this novel endeavour,” said a resident.

No COVID Death For The First Time In Maximum City