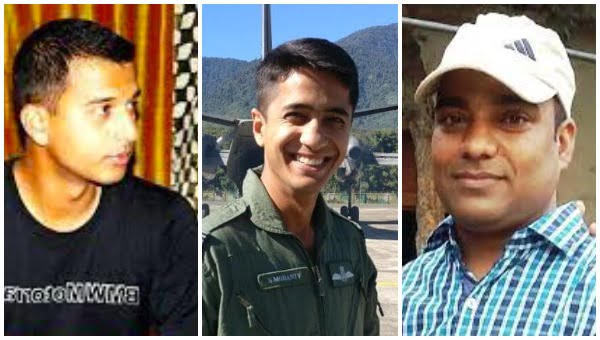 He was a resident of Krishnachandrapur village in Angul district. The mortal remains of Das will reach his village in Talcher on Thursday night, family sources said.

Odisha had lost three jawans in similar plane crashes in the past.

On March 28, 2014, a C-130 J Super Hercules aircraft, which took off from Agra, crashed 115 km west of Gwalior while on a routine training mission. Squadron Leader Kaushik Mishra was on board the transport vehicle along with 4 other IAF personnel.

Kaushik was the eldest son of Ashok Mishra, AGM at TRLK Refractories, Belpahar and Bijaylaxmi Panigrahi, a teacher at the Belpahar Adarsh School. He passed out of the National Defence Academy (NDA) and became a commissioned officer of the Indian Air Force in 2006 after graduating from the Air Force Academy, Dundigul.

Kaushik and his wife Puja, who is a resident of Talcher, were then staying in New Delhi with their 18-month-old daughter.

0n December 22, 2015, a chartered aircraft of the Border Security Force (BSF) crashed in a village in Dwarka near Delhi’s Indira Gandhi International Airport, killing all 10 people on board. Among them was Kishore Rout, a native of Deulatara village in Rajkanika of Kendrapada district.

The aircraft, Super King B200, crashed after hitting a wall at Shahbad Muhammadpur village in Dwarka, soon after it took off. It was carrying paramilitary technicians to Ranchi.

On June 3, 2019, Odisha-born Indian Air Force (IAF) Lieutenant Sunit Mohanty and 12 others were killed when an Indian Air Force AN-32 transport aircraft crashed on its way to Mechuka advanced landing ground in Arunachal Pradesh.

His body was cremated at Brar Square in Delhi Cantonment, exactly five years from the day he was commissioned into the Indian Air Force on June 21, 2014.

He was the son of Group Capt GC Mohanty (retd), a former IL-76 transport pilot. He had topped the Combined Defence Service (CDS) entrance exam, which he took after completing BTech from National Institute of Technology (NIT), Jamshedpur. Flt Lt Mohanty, who went by call sign ‘Monty’ — nickname given to all IAF pilots to shorten the radio commands — had a passion for flying since his childhood.

He was a native of Baliapali village under Kabisurjyanagar block in Ganjam district.