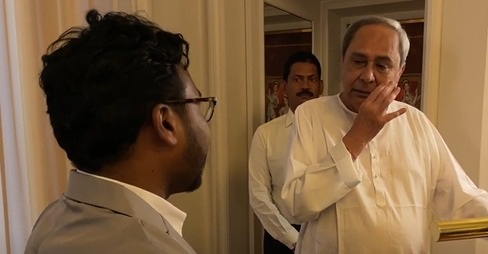 Bhubaneswar: In his Independence Day speech on Monday, Odisha Chief Minister Naveen Patnaik mentioned about Sesha Kisan, a tribal Odia scientist he met during his recent trip to Rome, and how happy he was to meet him.

Naveen mentioned about Kisan while talking about the Odisha government’s efforts to empower tribals.

“Odisha’s efforts for the development and empowerment of tribals have been commendable. Tribal youths from Odisha have attained fame and success in various fields in the country and abroad. I was very happy to meet Sesha Kisan in Rome recently,” the CM said in his speech.

Kisan, a young chemical scientist from Sambalpur district, is now a Research Associate at Georg-August University in Göttingen, Germany.

Kisan had first met the Odisha CM in 2018. In that meeting, Kisan wore slippers and carried a Nokia phone. Naveen, who gifted him an iPhone, had asked him to give a speech at the Secretariat. Kisan spoke on Odisha Knowledge Hub (OKH) before an audience that had ministers, bureaucrats, technocrats, academicians and students.

His next meeting with Naveen was in Rome, as part of the Odia diaspora in Europe whom the Odisha Chief Minister met in Italy’s capital. When he recalled his 2018 meeting with him and thanked him for what he is today, Naveen was so moved it brought tears to his eyes.

“He is like my parent,” Kisan, a native of Balasingha village in Sambalpur who has lost both his parents, said.

A gold medallist in Integrated Master of Sciences (MSc) from the National Institute of Science Education and Research (NISER) in Bhubaneswar, he joined the German University on October 1, 2018.

After reaching Germany, he adopted 170 poor students of his village and bore all their expenses.

Kisan’s inspiring story is strewn with personal tragedies. He lost his mother to illness when he was just a year old. In 2006, his father suffered from severe health complications. Kisan worked as a daily wager during vacations to support his father, elder sister and his studies. His father passed away in 2012. He was just 18 years old. Two years ago, he also lost his sister.

Kisan did his schooling from his village, topping the annual examinations for five consecutive years. In 2005, he bagged the Best Student Award and also topped the Navodaya entrance exam, allowing him to continue his studies from Class VI to XII. He scored 92% and 86% in his Class X and XII exams respectively.

In 2012, he cracked the National Entrance Screening Test (NEST), ranked 17. Unfortunately, however, his father passed away that year. He cleared NEST again in 2013, this time ranked 15 and got into the five-year integrated MSc course at NISER.