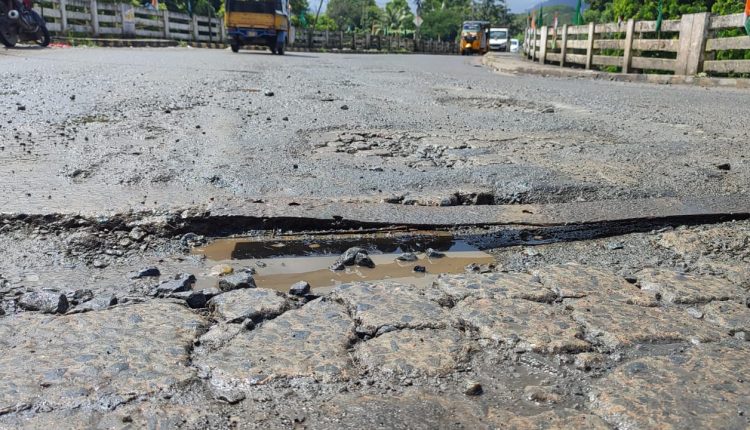 Rayagada: The overbridge, which serves as lifeline for vehicular traffic by connecting Rayagada with rest of Odisha, has turned a virtual death trap for lack of maintenance on the part of National Highway Authority of India (NHAI).

The 200-metre bridge, presently on National Highway 326, was constructed over railway tracks to facility communication for the vehicles in 1999. Initially built by the state government, it was brought under the NHAI in 2018.

The bridge serves as a lifeline for the vehicles to commute from southern districts including Koraput, Phulbani and Ganjam besides those from neighbouring Andhra Pradesh to the eastern Odisha, particularly capital city. Thousands of vehicles including the heavy vehicles carrying passengers and goods cross the flyover on daily basis.

Over the years, the condition of the bridge has deteriorated as the NHAI remains indifferent to repeated pleas by the locals for its repair. Dotted with numerous ditches and potholes, vehicular accidents on the bridge are regularly reported. The potholes have become so big that the iron plates and rods used on the surface have come out to the open.

Following complaints from the locals, a team of Congress leaders, led by MP Saptagiri Ulaka visited the bridge and expressed his concern over its poor condition. He told the media that he was aware of the condition of the bridge and had drawn the attention of the Centre in the Parliament. Besides, he has already intimated Odisha government and the district administration, he added.

Denouncing the indifference of NHAI and Central and state governments towards safety and security of the people, the MP threatened that if no step is taken for repair of the bridge before next Parliament session, his party launch a mass agitation.

It may be noted that the issue was taken up at a meeting of Road Protection Committee on August 25. The officials of police and transport department held the NHAI responsible for the dilapidated condition of the bridge and demanded urgent solution. The NHAI engineer, present at the meeting, had assured of taking steps by the end of September. But no repair work has been taken up till date.

Kapil Sharma Not Worried About ‘Zwigato’ Failing: ‘I Will Not Lose Anything’