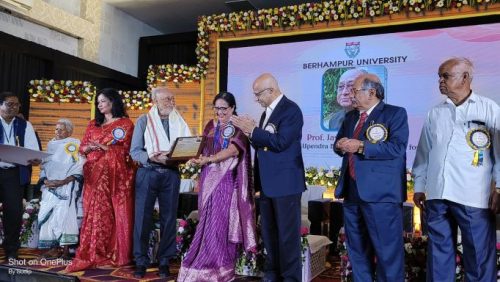 The award, instituted by Berhampur University in Odisha’s Ganjam district, was presented to Mahapatra during the university’s foundation day celebration at Biju Patnaik Auditorium in the campus. The award carries a citation and Rs 1 lakh reward.

On receiving the award, Mahapatra said, “It’s a great honour for a small poet like me to be chosen for this prestigious award in the name of such a great poet of Odisha. Writing poems taught me to know people more and how to love them.”

He started writing poems at the age of 38 years and was awarded by the Kendriya Sahitya Academy as the first English poet in 1981. He was also awarded with many national and international awards including ‘SAARC Award’, ‘Jacob Glatestine Award’, ‘TATA Sahitya Samman’, ‘Jeypore Sahitya Puraskar’ and others.