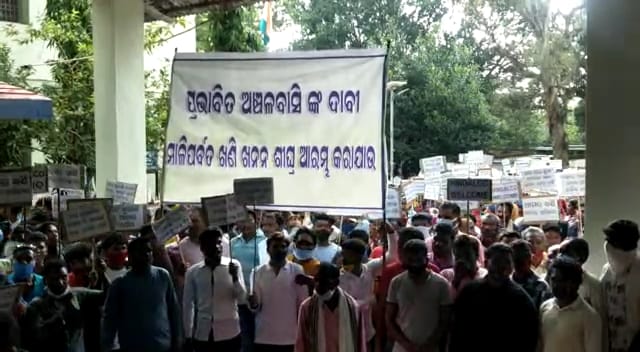 Koraput: A week after the public hearing on mining by Hindalco Industries Ltd in Mali hills in the district was cancelled due to opposition by the locals, hundreds of people took out a rally on Thursday in support of the mining.

The people of four panchayats participated in the rally to the collector’s office where they staged a demonstration and raised slogans in favour of mining in the hills. Later, they submitted a memorandum addressed to district collector to additional collector.

They claimed that a handful of people were opposing the mining due to the vested interests while most of the villagers coming under mining areas supported it.

Stating that mining activities in Kankada Amba would ensure employment to the local people, the agitators requested the district administration to hold public hearing amid security again.

During the public hearing held on September 22, some people armed with traditional weapons had reached the venue and disrupted the meeting. They also damaged the arrangements made at the spot leading the administration to call off the hearing midway.

Hindalco Industries Ltd was granted the lease for mining in 268.11 hectare in the hills surrounded by Aligaon, Sorisa Padar and Kankada Amba villages under Semiliguda and Potangi tehsils of Koraput district.

The company targeted to extract 0.6 million tonne of bauxite annually from the area. But it has not been able to start the mining activities due to opposition by the locals.