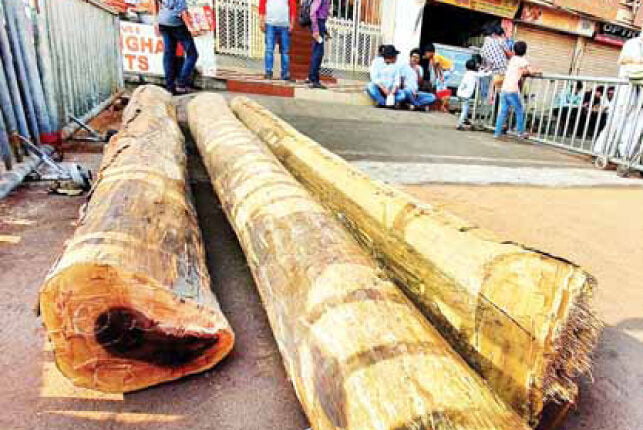 Puri: Stage is all set to perform ‘Ratha Katha Anukula’, the initiation ceremony for chariot construction for Lord Jagannath’s rath yatra in Odisha’s Puri, on the occasion of Saraswati Puja or Sri Panchami on Thursday.

While the carpenter servitors of the temple will start the chariot construction after seeking ‘Agyan Mala’ for the purpose on ‘Akshaya Tritiya’, ‘Ratha Katha Anukula’ will mark the beginning of the process.

As per rituals, three 12-feet long Dharua wood logs will be placed at the Ratha Khala, the designated site for chariot construction, for performing the puja in the evening.

A senior temple servitor said Ratha Katha Anukula will take place between 6 pm and 7 pm after worshiping goddess Saraswati on the occasion of Basant Panchami.

Kshatriya Brahmin will perform the puja for the wood logs in the presence of priests, servitors, senior officials and devotees. The worshiped logs will be used for ‘Nrusingha Guja’ in the chariots, he said, adding that similar rituals will be performed on Ram Navami and Akshaya Tritiya.

Servitors will perform puja on three logs of Dhaura wood before the construction, which will begin on the auspicious Akshaya Tritiya, and is scheduled to be completed in 44 days.

While a total of 347 wood logs are required to be available before Akhaya Tritiya, so far 104 pieces of timber, including 33 Asana and 71 Dhaura logs, have been brought from Nayagarh district. More logs will be collected from Boudh and Ghumusar areas fro the construction of three chariots, he said.

Ahead Of Republic Day, Huge Arms Dump Of Maoists Unearthed In Odisha