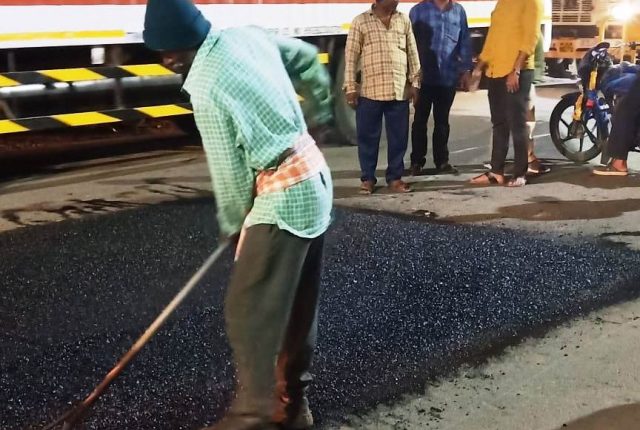 Berhampur: Amid miserable condition of roads in Odisha’s silk city Berhampur, the repair work has begun after the corporators of Berhampur Municipal Corporation (BeMC) expressed their annoyance and demanded quick steps for the safety of people.

According to sources, the work started with the repair of two major roads, from Bijipur Street to Berhampur Railway Station and the road from Santoshi Temple to Uttareswar Temple, by the Works Department on Tuesday night.

The department has said that the construction of both these roads will be completed at the earliest.

Notably, corporator of ward 26 Dhiresh Sabat, corporator of ward 27 Nilakantha Sahoo, other corporators, lawyers and intellectuals submitted a memorandum to the Revenue Divisional Commissioner (RDC), Southern Division, T. Ao following which he gave his word to direct the commencement of road repair work.

It is pertinent to mention here that the residents of Berhampur, regarded as the nerve centre of south Odisha, had threatened to launch an agitation if immediate steps are not taken to repair these for the safety of people.

People from different sections including politicians, intellectuals, social workers and lawyers held the BeMC and the works department responsible for the pathetic condition of roads, which are full of potholes.