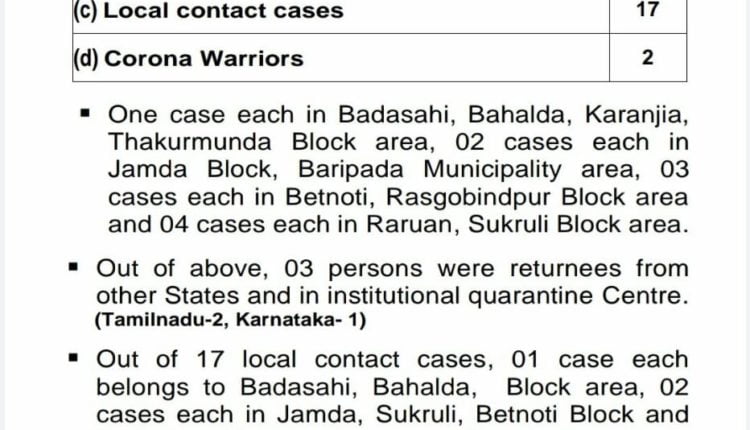 Baripada: The COVID-19 tally in Mayurbhanj district touched 455 on Saturday with overnight addition of 22 positive cases.

Of the new cases, four each were reported from Sukruli block under Raruan tehsil, three each from Betnoti and Rasgovindpur blocks, two each from Jamda block and Baripada municipality, and one each in Badasahi, Bahalda, Karanjia and Thakurmunda blocks.

The district administration informed that 17 of the new cases were local contacts. These included one each in Badasahi, Bahalda block area, two cases each in Jamda, Sukruli, Betnoti blocks and Baripada municipality area, three cases each in Rasgovindpur block area and four cases in Raruan thehsil.

Three were returnees from other states, including two from Tamil Nadu and one from Karnataka.

Besides, two corona warriors had tested positive for the virus in Thakurmunda and Karanjia blocks.

Contact tracing of all the positive cases is underway, the administration tweeted.

With 286 recoveries, Mayurbhanj district has 167 active cases at present.