BhubaneswarOdisha
By OB Bureau On Dec 6, 2021 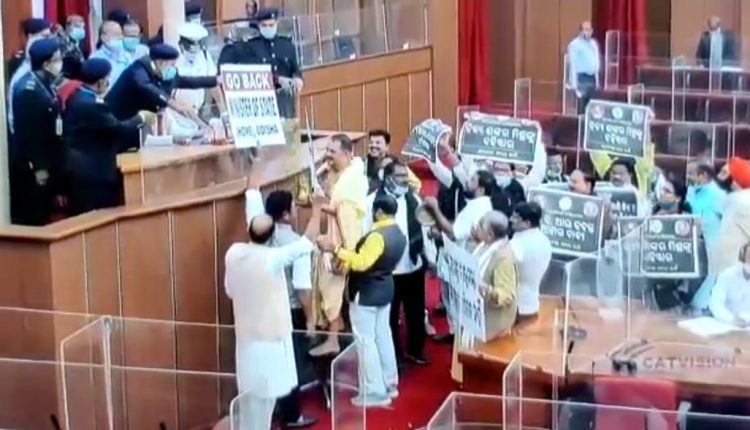 Bhubaneswar: The state Congress on Monday lashed out at the Chief Minister Naveen Patnaik-led BJD government for accusing the Opposition of paralysing proceedings in the Odisha Assembly.

“The Opposition is not paralysing the House. We want a discussion on the sensitive Mamita Meher murder case. The ruling party used to say they are not afraid of a discussion. Why is it scared now,” state Congress MLA Narasingha Mishra asked at a press conference here.

Mishra said that it was the Opposition’s demand that discussion on the Mamita Meher murder case should be accorded top priority, even if it required postponing the Question Hour and other House business.

“But no steps were taken by Speaker Surjya Narayan Patro to initiate a discussion on the issue,” he said.

Hitting out at the ruling party, the Congress leader said that before the Supplementary Budget was presented on the first day of the Winter Session on December 1, the Opposition drew the Speaker’s attention to the letter and motion they had submitted demanding a discussion on the Mamita Meher issue. “But the Speaker didn’t allow us to speak,” he said.

Mishra said that the BJP and Congress also moved adjournment notices for a discussion on the sensitive matter. “When the House has no business to attend to, the adjournment notices could have been discussed but the Naveen government got scared,” he said.

“We wanted a discussion on the Mamita Meher issue, but it was not allowed. We protested, we demanded that the issue should be discussed. The CM and BJD leaders always used to say that they are ready to answer any question asked by the Opposition. Then why is the government scared now,” he asked.

“When House proceedings are paralysed, the Speaker calls the Opposition for a discussion to find a solution out of the impasse. Till now, the Speaker hasn’t called us,” he said.

Mishra lashed out at the CM, saying that as the Leader of the House it is he who should call the Opposition for discussion to break the logjam. “But after Naveen became the CM, one no longer sees that tradition,” he said.

“After a long silence, the CM gave a statement on the Mamita Meher case from his residence. It’s not known whether he was reading from a written statement or it was a recorded statement. The CM accused the Opposition of politicising the issue and not allowing the House to run. We condemn this,” he said.

“The Opposition wants the House to run smoothly, ask questions and accord top priority to the Mamita Meher case. The ruling party, however, is resorting to adjournments,” Mishra said further.

Reminding Naveen that when he was a Central minister, he personally arrived at a Mahila police station to lodge an FIR and had called an Odisha bandh, Mishra said, “What he did is not politics. But we are following the Constitution and rules of House business and that is politics.”

The state Congress also released an earlier video at the press conference in which Mamita’s father alleged that Minister of State for Home Dibya Shankar Mishra used to sexually exploit girls at Mahaling college in Kalahandi and got her killed when she opposed it.

“Mamita knew it, she opposed it… that’s why Mishra and Sahu conspired to eliminate her,” her father told local news channels.

Her father alleged that the victims of the sex racket were rewarded with first class or ‘best 10’ ranks in academics.

Mamita’s father called Sahu the right-hand man of Mishra. He alleged that the minister used to visit the college frequently and stay there to sexually exploit the girls. He termed the police probe an eyewash.