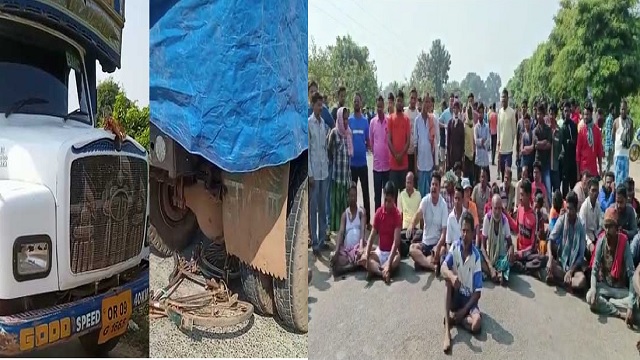 Bhubaneswar: A man was killed after being hit by a garbage-laden truck engaged by the Bhubaneswar Municipal Corporation (BMC) near Daruthenga on outskirts of Odisha capital on Sunday, two months after the death of a youth in a similar incident.

The deceased has been identified as Rama Chandra Gagarai (46), a resident of Daruthenga village.

According to sources, Gagarai was travelling on a bicycle when he was hit by the BMC’s garbage truck en route Bhuasuni dumping yard.

The locals have demanded adequate compensation to the family of the deceased and an inquiry into the incident by the BMC.

“There is no registration plate on this truck which caused the accident. The fitness of these vehicles is questionable and for sure there was a mechanical failure of brakes which led to the fatal mishap,” Routray told media.

A team from the BMC, including Mayor Sulochana Das and Municipal Commissioner Vijaya Amruta Kulange rushed to the spot and tried to pacify the irate villagers.

The Mayor consoled the bereaved family and announced financial assistance of Rs 5 lakh. She also promised a job to the son of the deceased in BMC.

BMC also reportedly decided to temporarily suspend dumping of garbage at Bhuasuni after the Mayor held a discussion with the villagers.

Following this, the agitation was withdrawn and traffic movement was back to normal.

It is pertinent to mention here that a 22-year-old youth, identified as Reshab Routray (22), had died after being hit by a waste-laden truck near Daruthenga on Chandaka-Pitapalli Highway in August.

Also read: BMC To Do Away With Garbage Dumping Yard, Says Bhubaneswar Mayor