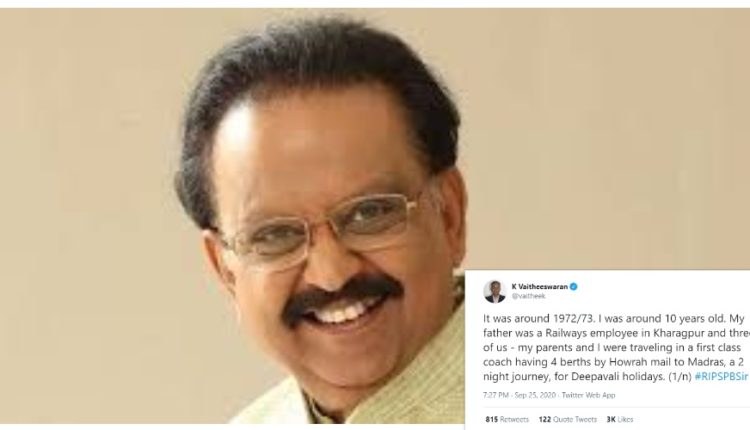 Bhubaneswar: Among all posts and videos of late singer-actor SP Balasubrahmanyam’s humility on social media, one story stood out – that of a little boy who was witness to an impromptu musical session during a train journey in the early 70s.

User K Vaitheeswaran (@vaitheek) took to Twitter sharing a story from his childhood when he happened to meet Balasubrahmanyam during Diwali vacation while travelling to Chennai from Howrah on a train. Sharing that the artiste impressed his family with his music, Vaitheeswaran wrote how they didn’t realise their ‘privilege at that time’.

A few years later when Balasubrahmanyam rose to fame, Vaitheeswaran realised what a great memory it was.

“For school kids like me growing up in Madras in the 70s onwards, his voice was all around us. Day in and out. I am now 57 years old. Daily when I am out walking, his voice accompanies me. As it will tomorrow. And every day thereafter,” he added.

Here’s the story, woven in a series of tweets:

Next day, the train reached Waltair jn. (Vishakapatnam today) around noon. My uncle's family who lived there met us at the station with a huge basket of sumptuous lunch. Just as the train was leaving the platform, a young man rushed in and took the empty berth.(2/n) #RIPSPBSir

After regaling us with some stories, he started singing some lovely songs in Telugu and Tamil. We didn't know the songs as such but they were undoubtedly melodious. What we didn't realise was our privilege at that time. (4/n) #RIPSPBSir

My parents were surprised "You are a singer. Doesn't your voice get affected?" He laughed and replied "Oh no, not at all. In fact it helps me sleep well at night before a recording which is very important." (6/n) #RIPSPBSir

Next day early morning, as the train pulled into Madras central and I was still groggy, he said good bye to my parents who wished him luck with his recording. He patted my head walked off briskly. I never met him again. A few years later, I shifted to Madras. (8/n) #RIPSPBSir

As it will tomorrow. And every day thereafter. We all have our top #SPB songs but what I will forever cherish is the special music session by a legend on a train between Vishakapatnam and Madras and for me an absolute privilege. (10/n) #RIPSPBSir

SPB Was Hurt As He Was Getting Fewer Offers, Less Money Than…