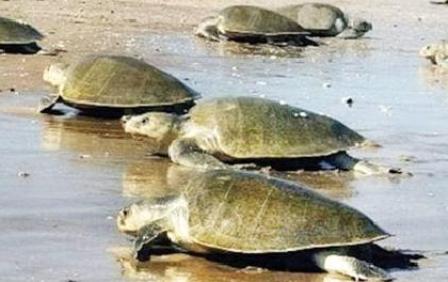 Kendrapada: The mass nesting of the Olive Ridley turtles began along the Gahirmatha coast on Wednesday.

Rajnagar Wildlife Division DFO Bikash Ranjan Dash informed that 300 Ridley turtles laid eggs in the evening and 800 more at Nasi-I and Nasi-II late in the night.

Stating that more than one lakh turtles have congregated at the coast, he said the number of nesting is expected to go up from Thursday night as the weather is conducive with the blowing of the southward wind.

The female Ridley turtles lay their eggs at a distance of about 100 metres from the coast. After laying the eggs, they cover them with sand and return to the sea.

The eggs begin to hatch in 45-60 days and soon after, the hatchlings rush to the sea.

To protect the eggs, the forest guards have been deployed in several temporary camps along the coast, the DFO said.

In view of the nesting season, the entry of fishing boats and trawlers has been banned along the  20 km radius of the Gahirmatha coast.