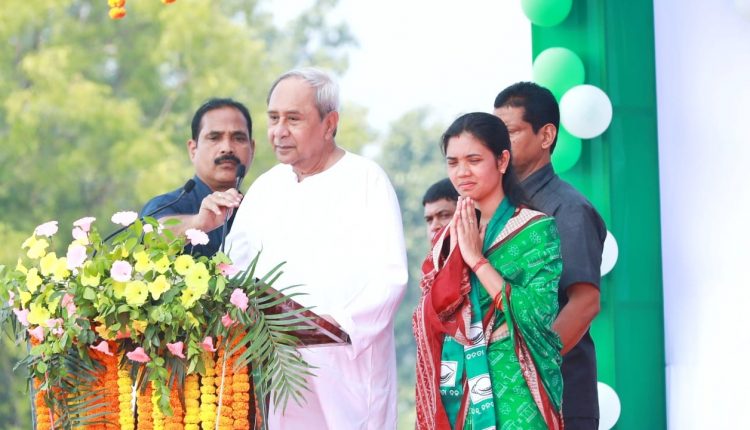 The Biju Janata Dal (BJD)  has registered a resounding win against the Bharatiya Janata Party (BJD) in Padampur where a bypoll was necessitated following the death of sitting MLA Bijaya Ranjan Singh Bariha.

Following its debacle in Dhamnagar bypoll weeks back, the win in Padampur is a big respite for the BJD, which has been ruling Odisha for more than two decades.

As the BJD candidate, Bariha’s daughter Barsha Singh trounced BJP candidate Pradip Purohit, who represented the constituency from 2014 to 2019, by a whopping margin of 42,679 votes. The third candidate, Satya Bhushan Sahu of the Congress, a three-time Padampur MLA, managed to garner just 3,548 votes and lost his security deposit.

The new MLA will serve the constituency for just one and a half years.

The BJD simply could not have afforded a loss in Padampur despite the fact that its candidate was a political novice. A defeat in Padampur had the potential of sending the BJD towards a downward spiral while allowing more than enough room for the BJP to flex its muscle in the run-up to the 2024 elections. It deployed almost all state ministers and over 40 MLAs in Padampur for the election campaign.

Enthused with the Dhamnagar win, the BJP too pushed the envelope for a repeat performance with its top leadership including Union ministers, the Leader of the Opposition in state Assembly, MPs and MLAs, extensively campaigning in the constituency.

Both parties did not lack in resources, both human and material. Congress had neither the resources nor the motivation to match the bustling energy of the BJD and the BJP.

Many people in Padampur as well as the state, however, are aghast at the way the parties, especially the BJD and the BJP, campaigned. The leaders landed in the constituency in swanky SUVs seeking votes along with hundreds of their followers. Personal attacks flew thick and fast.

The campaigns displayed arrogance of wealth and power in plenty. The contest became a slugfest rather than a truly democratic process. In the melee, the local issues took a backseat and candidates lost their identities. Congress candidate Sahu became invisible.

The campaigning witnessed a new low as two senior BJP leaders cast aspersions on the BJD candidate’s character. This may very well have contributed to her higher victory margin.

The big win in Padampur is, no doubt, a boost to the BJD’s vanity following its loss in Dhamnagar. The BJP, quite euphoric after its victory in Dhamnagar, is flummoxed as to why the margin of defeat in Padampur is so huge despite Purohit having a strong personal base in the area. The Congress leaders are wondering where the 32,000 plus votes for Sahu in the 2019 elections have vanished.

Why did the BJD and the BJP fight with all their might in Padampur, and weeks earlier in Dhamnagar, especially when the newly-elected MLAs won’t have much time in the Assembly? It’s all about asserting supremacy by the BJD and the BJP before the assembly as well as Parliament elections in 2024. The Padampur results, just like in Dhamnagar, also reflect how the Congress, which once ruled Odisha, is in a sad state.

In the process, the adage of “may the best candidate win” has changed to “may the most resourceful party win”.

Would the results have been different had all the parties decided to let the candidates fight it out among themselves in the bypoll without external interference of ‘heavyweights’ and the inherent resources? Should there be a consensus on this among all parties in the future?

Sadly, Padampur, or for that matter Dhamnagar, is just a model that is replicated across the country by each and every party, year after year. And the real losers are the people.