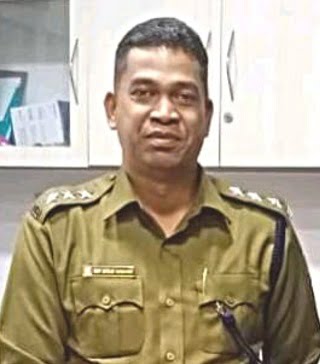 Berhampur: More details have emerged about the circumstances leading to the death of Deb Kumar Gamang, Inspector In Charge (IIC) of Gangapur police station in Ganjam district, who is suspected to have shot himself with his service revolver on March 25.

Ganjam police are yet to confirm whether the IIC killed himself or it was a case of accidental firing.

According to a report in a news portal, there were three policemen inside Gamang’s official quarter when the incident took place. The policemen were trying to persuade the IIC to deposit the revolver at the police station and go on leave, the report says. There were some constables outside the house.

“But Gamang didn’t listen. He shot himself in the abdomen all of a sudden,” the report states, citing a police source.

Gamang’s mother told mediapersons on Saturday that two police officers were with him at home when the incident took place. The 40-year-old IIC did not report for work that day. She had informed the Gangapur police station that he was unwell and that she had also requested for a doctor to be sent to their quarters.

She said that the police officers who were with his son asked her to leave the room, which she did. Minutes later, she heard gunshots and saw Gamang lying in a pool of blood, she told mediapersons.

Before the incident, Gamang had also spoken to his wife.

According to another report in the news portal, the IIC’s sister too had called a senior police officer for help.

There are reports that the IIC was suffering from psychological issues and was under treatment.

Will Naveen Push For Vidhan Parishad In Odisha During Delhi Trip?