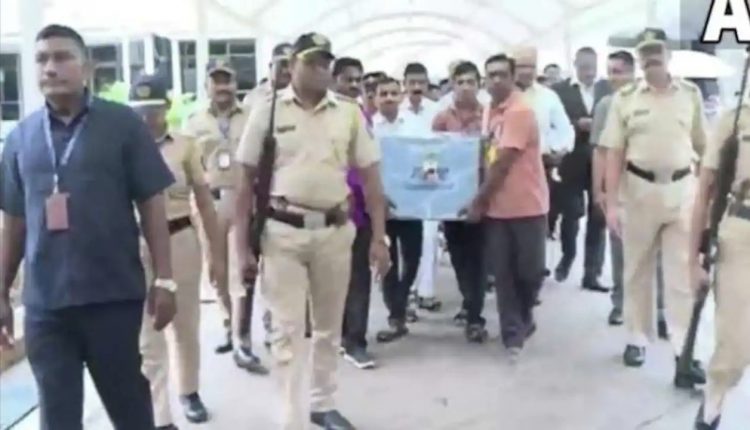 According to the Election Commission, each ballot box is issued an e-ticket under the name Mr Ballot Box, which occupied the front row seat in the aircraft escorted by Assistant Returning Officers (AROs) of their respective states. The EC also posted photographs of the sealed ballot boxes onboard flights accompanied by the respective AROs.

The ballot boxes from states which do not have direct flights will arrive by Tuesday evening.

Also Read: Do You Know ‘Mr Ballot Box’ Travels On Flight As A ‘Passenger’?

In Odisha, 145 members of the 147 legislators, including Chief Minister Naveen Patnaik, Congress legislature party leader Narasingha Mishra and all state ministers, exercised their franchise in Room No-54 of the State Assembly. Leader of opposition (BJP) Pradipta Kumar Naik, who is undergoing treatment at a private hospital for post-COVID complications, arrived in Parliament in a wheelchair with oxygen cylinder to cast his vote for the 16th Presidential election.

The lone legislator, who abstained, was Chilika MLA Prasanta Kumar Jagadev. The MLA, who was arrested in a road rage incident while trying to enter Banpur block office in Khurda district on March 12, was denied bail by the Orissa High Court on May 21.

Notably, the BJD along with one independent MLA and an expelled BJD MLA, had already announced their support for NDA candidate Droupadi Murmu, a tribal leader from Odisha’s Mayurbhanj district.

The ruling BJD has 112 MLAs in Odisha Assembly and two among them have been expelled, while the BJP has 22, Congress nine and CPI-M and Independent one each.

The day, however, witnessed cross-voting with Cuttack-Barabati MLA from Congress Mohammed Moquim claiming to have cast his vote in favour of Murmu, defying the party diktat to vote for joint opposition candidate Yashwant Sinha.

The counting of votes and the declaration of results will take place on July 21. The result will also be uploaded on the Rajya Sabha website under the link- presidentialelection2022.  The new President will take oath on July 25.