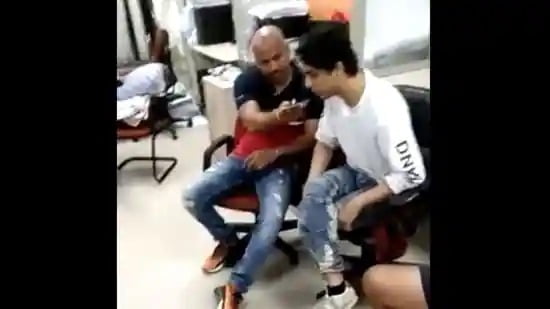 Mumbai: A day after a video of KP Gosavi and Aryan Khan surfaced, the former on Monday claimed the son of Bollywood superstar Shah Rukh Khan had requested him to call his parents.

“Aryan Khan called me to speak to his manager because he did not have his own phone at that time. I was carrying my phone, he (Aryan khan) just requested me to call his parents and manager,” he was quoted as saying by India Today.

In the video, Gosavi was seen holding a phone while Aryan spoke.

An independent witness of the Narcotics Control Bureau (NCB) in the Mumbai cruise drugs bust case, Gosavi further said that he signed the panchnama after reading the content.

This is contrary to the statement made by his bodyguard Prabhakar Sail, who alleged that he was made to sign blank papers are the raid on the Goa-bound cruise ship, following which Aryan was arrested earlier this month.

Gosavi had hogged the spotlight after a selfie with Aryan went viral.

Sail had also made startling disclosure about an Rs 18 crore deal between Gosavi and a certain Sam D’Souza, of which Rs 8 crore was to be paid to Wankhede.

Gosavi, however, said that he did not know Wankhede previously and “saw him on TV only”.

Meanwhile, Sail visited Mumbai Police commissioner’s office on Monday apparently in connection with his security concern. He told the media that he feared for his life after Gosavi reportedly went missing.

Gosavi said he was in Mumbai till October 6 and then switched off his phone after numerous threat calls, the report added.