Muslim Representation Up From Lowest Ever In Last Lok Sabha 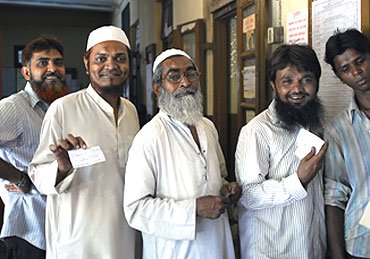 Muslim representation in the 17th Lok Sabha has risen from 22 to 27 MPs, says a report in India Today. Also, the BJP got its lone Muslim face in Saumitra Khan, who won from Bengal, defeating the Trinamool Congress.

Most other Muslim candidates are from Opposition parties. The BJP won 303 seats in the 542-seat Lower House.

The NDA, of which the BJP is a part, had one more Muslim MP in the Lok Janshakti Party’s winning candidate from Khagaria in Bihar.

Muslim representation in the 16th Lok Sabha had dipped to its lowest so far to 22 from 33 in the 15th Lok Sabha. The highest number of Muslim MPs in any Lok Sabha was in 1980 when there were 49 members representing the community.

The BJP had fielded six Muslim candidates. Saumitra, a former Trinamool Congress member who switched to the BJP ahead of the polls, won from Bishnupur in Bengal, where the party won 18 of the 42 seats.

He defeated Trinamool’s Shyamlal Santra by a margin of 78,047 votes.

The BJP had also fielded Mafuja Khatun from Jangipur, where 61.79 per cent of the population is Muslim. She ended up being third while Trinamool’s Khalilur Rahaman won. The seat was earlier represented by Congress’s Abhijit Mukherjee, son of former President Pranab Mukherjee. Abhijit stood second this time.

Another Muslim candidate the BJP fielded was Humayun Kabir from Murshidabad, which has a 66 per cent Muslim population. Kabir polled 2,47,809 votes but remained third.

Most of the elected Muslim candidates belong to the Congress (5) and Trinamool Congress (5), followed by the Samajwadi Party (3), Bahujan Samaj Party (3) and the Jammu and Kashmir National Conference (3).

Uttar Pradesh and Bengal, which have a considerable Muslim population, are sending six Muslim MPs each. In the 2014 Lok Sabha elections, no Muslim candidate had won from Uttar Pradesh even though the BJP had won 71 of the 80 Lok Sabha seats there.

BSP candidates Afzal Ansari from Ghazipur, Fazalur Rahman from Saharanpur and Danish Ali in Amroha, and Samajwadi Party’s Azam Khan from Rampur, Shafique Rehman Barq from Sambhal and S.T. Hasan from Moradabad made their way to the Lok Sabha. The Congress had fielded six Muslim candidates in Uttar Pradesh, but none of them won.

Jammu and Kashmir, a Muslim-majority state, has elected three MPs, all from the National Conference. Bihar, which had sent four Muslim MPs to the Lok Sabha in 2014, will only have two MPs from the community this year. Besides Kaisar, there is Mohammad Jawed of the Congress, who won from Kishanganj.

Three Muslim candidates won from Kerala, while two from Assam, too, will be in the 17th Lok Sabha.

The All India Majlis-e-Itthadul Muslimeen will have two candidates in Parliament – party chief Asaduddin Owaisi from Hyderabad and Imtiaz Jaleel from Aurangabad in Maharashtra. Jaleel’s victory gains significance as Aurangabad is not a Muslim-majority constituency.

The party had formed an alliance with Prakash Ambedkar’s Vanchit Bahugan Aghadi in Maharashtra.