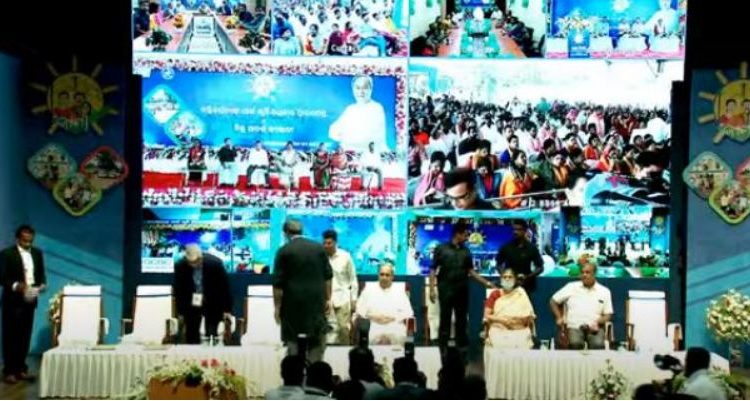 The ambitious drone survey, aimed to identify slum dwellers and areas in the five municipal corporations of the state for transfer of land rights, will get technical support from Tata Steel Foundation. An MoU was also signed between Tata Steel Foundation and Jaga Mission for the purpose in the Chief Minister’s presence.

Expressing happiness over the new slum-free status achieved by Hinjili and Digapahandi, Naveen said Biju Adarsh Colonies are being established by providing basic facilities in the slum areas along with land rights to slum-dwellers.

The Chief Minister announced that by December 2023, all the slums in the state will be converted into model colonies and the entire state will be made slum-free.

Noting that Jaga Mission program has gained worldwide recognition and applause, Naveen said the Central government has also awarded this innovative idea. “The focus of this mission is People first,” he said.

Stating that 1.70 lakh families of slum areas in 105 cities and towns have so far been given land rights under Jaga Mission, the Chief Minister announced that land rights will be given to 2.5 lakh slum families of the state by December 2023.

Noting that ownership of land and house increases one’s self respect and confidence, he said this ambitious campaign will bring transformation in the lives of the poor people of the cities.

Describing the Jaga Mission launched in 2017 as a spiritual journey, the Chief Minister said this journey has brought substantial success and satisfaction so far.

The associations will manage the Biju Adarsh Colonies and provision has been made to allocate 25 per cent of the municipal budget to these bodies for the development of infrastructure in the slums.

The state government has started a pilot program to identify the causes of slums and prevent them so that the cities remain slum-free, he said.

Emphasising that the poor people of the country have an equal right to the benefits of development and growth, the Chief Minister said his government will not sit quietly until the poor get social and economic justice.

The Chief Minister said that the slum development program will play an important role in providing equal rights and justice to the urban poor. The spiritual journey will continue to play its role in bringing lasting happiness to the lives of 17 lakh slum-dwellers of the state.

Housing and Urban Development Minister Usha Devi praised the vision of the Chief Minister for the development of the cities of the state, especially the slums. She said that such an initiative is unique in the whole country.