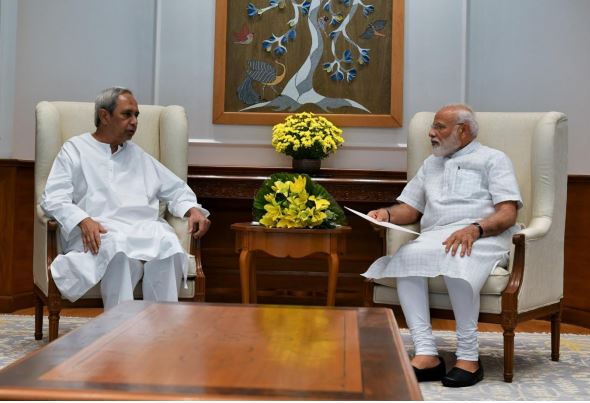 “I met the Prime Minister and congratulated him on his electoral victory,” the Chief Minister told mediapersons after the meeting. “I requested him to accord Odisha a special category state status. As you know, we have been hit by the recent cyclone Fani, which has done a great deal of damage.”

He urged the Prime Minister to sanction 5 lakh pucca houses under Pradhan Mantri Awas Yojana (Gramin) for Odisha on a 90:10 sharing pattern as a special case. “The Permanent Wait List (PWL) criterion should also be waived for this special allocation,” Naveen said. “I also asked the Prime Minister to release Rs 5,000 crore central assistance for post-cyclone restoration works.”

The chief minister apprised the Prime Minister about the “unique geo-climatic conditions of Odisha that make it vulnerable to multiple and frequent natural disasters. The state has experienced floods, cyclones or droughts every year in the period from 1900 to 2019. Naveen urged Modi to include “natural calamity” as an indicator to be able to accord Special Category Status to Odisha.

He even suggested that pending consideration of this request, states hit by major calamities be declared “Special Focus States” and granted benefits of a Special Category Status for a specific period. This will help reconstruction of infrastructure and restoration of livelihood. It will help not just Odisha but any state that has been hit by a major natural calamity, Naveen said.

The chief minister, however, thanked the Prime Minister for the central government’s support to effectively manage cyclone Fani and its aftermath.

Naveen told Modi that the state government had submitted a memorandum to the ministry of home affairs after assessment by different departments. “Loss to public property and funds required for prompt relief measures have been assessed at around Rs 9,336 crore. However, keeping in view the present State Disaster Response Fund (SDRF)/ National Disaster Response Fund (NDRF) norms, Odisha is seeking assistance of about Rs 5,228 crore from the NDRF immediately in order to meet expenses for ongoing relief and restoration works.

He said that reconstruction of damaged public infrastructure falls largely outside the ambit of the SDRF/NDRF with a few exceptions. Additional assistance provided by NDRF in case of a calamity of a severe nature was highly inadequate vis-a-vis damage to infrastructure and livelihood, he said.

Naveen said he had urged the Prime Minister to revise coal royalty, not amended since 2012, from 14 to 20 per cent. Such a revision will help the state government get Rs 10,000 crore additional revenue. He brought to the Prime Minister’s notice that Odisha produced about one-fifth of the total coal produced in the country and was bearing the adverse effects of coal mining, such as environmental pollution, displacement of mining affected population and strain on water resources and infrastructure.

Asked if he held any discussion on the post of Deputy Speaker of the Lok Sabha, the chief minister replied in the negative. He also denied any discussion had taken place on implementation of the central health scheme, Ayushman Bharat, in Odisha.

The chief minister was scheduled to meet President Ram Nath Kovind and other Union ministers later in the day.