Obituary For ‘Media’ Gets Published In Leading Newspaper; Did It Miss The Smart Wordplay? 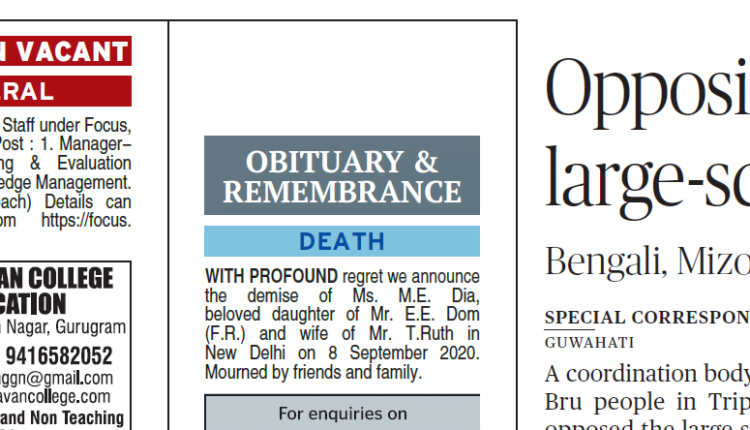 Bhubaneswar: Be it outside Kangana’s demolished office or Rhea Chakraborty’s house or inside the aeroplane to telecast Kangana’s ‘historic’ travel from Chandigarh to Mumbai, the flurry of reporters grabbing almost everyone to speak, using expletives during live reporting and the abusive debates on television project a sorry state of affairs of media these days.

Following Sushant Singh Rajput’s death, the media has also been accused of diverting attention from more pressing issues like the spike in coronavirus cases, the slump in the economy and the standoff with China in Ladakh.

Probably, compelled by the all these and much more, a 2016-batch alumna of St. Stephens College, Kartik Sahni, wrote an obituary for media which got published in a leading English newspaper.

Either the newspaper saw what he was trying to say and published it deliberately or they were confused by the smart wordplay.

“With profound regret, we announce the demise of Ms M.E. Dia, beloved daughter of Mr E.E Dom (F.R.) and wife of Mr T.ruth in New Delhi on 8 September 2020. Mourned by family and friends.” the obituary reads.

Wondering about the meaning of the names –  Ms M.E.Dia is media, Mr E.E.Dom (F.R.) is freedom and Mr T.Ruth is truth.

People are awed by the creativity of the obituary, even though Mr E.E.Dom (F.R.) confused a lot of people with its not-so-direct wordplay.

However, this is not for the first time such an obituary has been published in the leading newspaper. Earlier, in June 1975, Ashok Mahadevan had penned a similar obituary to fight Emergency, claimed a user.

Brilliant!! reminds me of this death notice in the Times of India in June 1975
It says,
D'OCracy – D.E.M., beloved husband of T. Ruth, loving father of L.I. Bertie, brother of Faith, Hope, Justicia, expired on June 26. pic.twitter.com/OTjzIk1tCL

Odisha Plus II Arts: Application For Rechecking Begins, Students Can Apply Before Sept 25