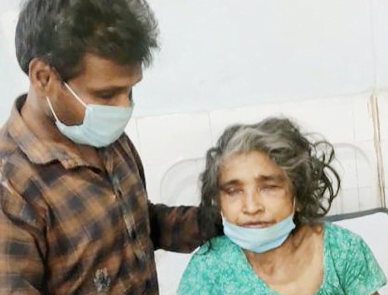 Berhampur: Chief Secretary Suresh Chandra Mohapatra has directed the Ganjam administration to rehabilitate an 85-year-old visually-impaired woman, who was deserted by her wards due to penury.

The woman, identified as Bijaya Patnaik, was rescued by Bhanjanagar police from near a bridge at Loharkhandi and admitted to the sub-divisional hospital around 5 pm on Friday.

Bhanjanagar Sub Collector has also asked the hospital authorities to take care of the old woman and provide the necessary medical treatment.

According to sources, Bijaya belongs to Golanthara and used to stay at her daughter’s house at Jagannathprasad. She has two sons and a daughter who is married.

The sons had gone to Kolkata in search of employment opportunities, but they returned home due to COVID-induced lockdown. They arrived at their sister’s house at Jagannathprasad and stayed there for quite some time. As their sister expressed her inability to arrange food for the three of them, she advised her brothers to take responsibility of their mother and leave her house.

Finding no alternative, the sons took their mother in an auto-rickshaw and deserted her near the river bridge at Loharkhandi.

Locals detained them when they were alighting their mother, who was crying aloud, at the place, and informed police.

Stating that the elderly woman will be provided security benefits and rehabilitated in her own home, the Chief Secretary warned against such inhuman behaviour towards senior citizens and said that those involved in such atrocity will face stringent legal action.