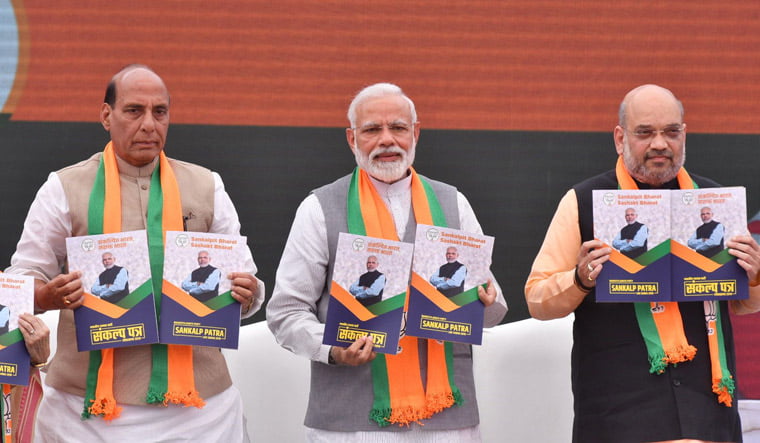 Bhubaneswar: Though a bit late, a manifesto has finally found a place in the BJP’s poll narrative, as Prime Minister Narendra Modi released it on Monday for the general elections beginning Thursday.

Besides its pet issues like Ram Mandir, abrogation of Article 370 and national security, the party has made an attempt to endear itself to the agrarian community with the proposal to expand the ambit of Pradhan Mantri Kisan Samman Nidhi (PMKISAN) to include all farmers in the country. At present, it covers only those owning up to five acres of land.

By doing so, it has relented to Chief Minister Naveen Patnaik’s demand to include landless labourers, share croppers and vulnerable agricultural households under the scheme. Drawing parallels with the Krushak Assistance for Livelihood and Income Augmentation (KALIA) scheme, launched by the Odisha government, Naveen had written to Prime Minister Modi in February, saying that this will make PM-KISAN more inclusive and further accelerate agricultural prosperity of farmers besides reducing poverty.

In the 2019 election manifesto, the BJP has promised to double farmers’ income by 2022. “We are committed to making an investment of Rs 25 lakh crore to improve productivity of the farm sector. We will provide short-term new agriculture loans of up to Rs 1 lakh at a 0 per cent interest rate for 1-5 years on the condition of prompt repayment of the principal amount. PM-Kisan scheme will further be expanded to include all farmers in the country. We will launch a pension scheme for all small and marginal farmers in the country so as to ensure social security to them on reaching 60 years of age,” it reads.

After losing three states in the Hindi heartland over farmers’ issues in December 2018, the BJP, in a widely anticipated move, came up with its own scheme in February in the hope of endearing itself to the agrarian community.

Interim finance minister Piyush Goyal, in his budget speech on February 1, said 120 million farmers with less than two hectares each, who account for over 85 per cent of India’s farm holdings, would get Rs 6,000 each annually.

Among the schemes rolled out by the Centre, Telangana and Bengal governments for the farmers, experts have hailed that of Odisha’s as the most comprehensive, as it covers landless agricultural labourers too. It also seeks to provide help to vulnerable agricultural households, besides promising interest-free crop loan.

The cap of two hectares to make a farmer eligible for the central scheme, however, proved to be an eyesore. The BJP, which is eyeing a second term in office, cannot risk another chance and spoil its prospects on this issue. For the election win, “Jai Jawan, Jai Kisan” seems to have become the slogan of this incumbent government too.

Emphasis Given To Women In BJD Manifesto: Naveen