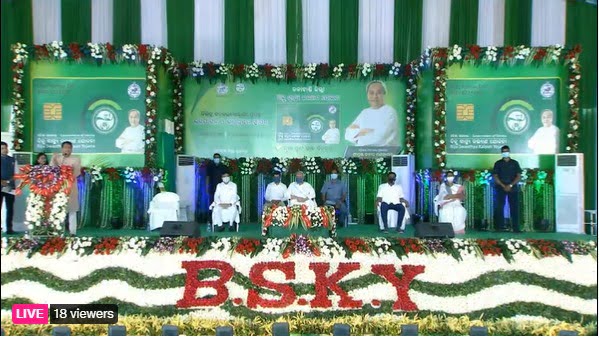 Besides distributing BSKY smart health cards to the beneficiaries, the CM dedicated key development projects worth Rs 860 crore to the people.

Notably, Mishra was dropped out of CM’s Mayurbhanj tour last month when the allegation surfaced. Since then, the ruling BJD is engaged in an image-building exercise for the minister. Seven days before the programme, the minister began making public appearances in his assembly constituency Junagarh as well as in Bhawanipatna. His pictures with the women electorate were ostensibly orchestrated to phoo-phoo the opposition charges.

His sharing the dais with the CM is now being viewed as the ruling party’s response to the Opposition crying hoarse for his resignation. While the party has all along been defending Mishra, this trip shows that the BJD leadership is unlikely to accede to the BJP and the Congress’ demand.

Mishra, who represents the Junagarh constituency, had earlier termed the allegations as propaganda and urged the political parties and the media to go to the police or court if there is an iota of evidence against him.

Meanwhile, the BJP staged a black flag protest at MSA Chhak in Bhawanipatna and raised “Naveen, Go Back” slogans ahead of the CM’s visit. Several protesters were detained by police.

BJP workers also scuffled with police while attempting to barge inside the venue where Higher Education Minister Arun Sahoo was distributing BSKY smart cards to the people of Kesinga.

The BJP also staged a massive rally from Rajmahal Chhak to Naveen Niwas protesting against the CM’s visit to Kalahandi.

The Congress has also called for a ‘Janata Curfew’ in Kalahandi.