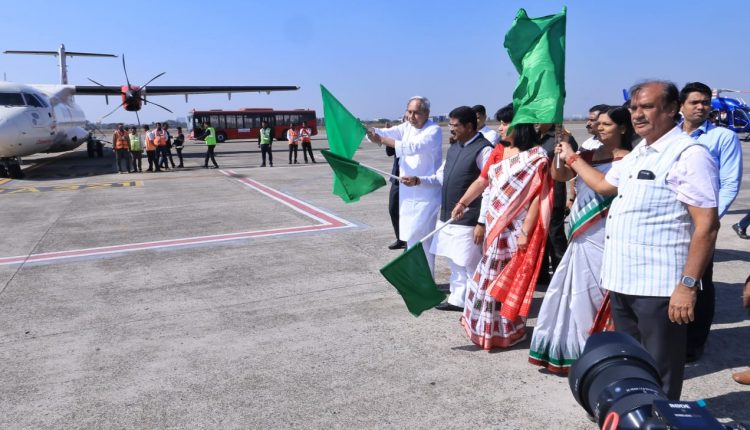 It also thanked the Odisha government for “the help”.

The advertisement asserted that the airport was revived with the allocation of more than Rs 64 crore through the Ministry of Civil Aviation under UDAN. The rourkela-Kolakata route has been awarded for operationalization under the same scheme.

The RSP-run Rourkela airport of SAIL is being managed by the Airports Authority of India (AAI).

On Saturday, Dharmendra slammed the BJD government for not giving ‘due credit’ to the PM and Scindia by excluding them from the posters, banners, and newspaper advertisements. “Flight operation to Rourkela began under UDAN, a scheme envisioned by the PM and it was implemented under the direct intervention of Scindia ji. Should we not have the basic courtesy to acknowledge their role in the operationalisation of the airport (Rourkela)? It is unfortunate that Modi Ji’s picture was excluded,” he said.

The state government failed to show any sign of acknowledgement in recent events, including the inauguration of Birsa Munda Hockey Stadium in Rourkela and Deloitte Centre in Bhubaneswar, he further said.

The state commerce and transport minister, Tukuni Sahu, had said that flight operation to Rourkela has become a reality because of the vision of Chief Minister Naveen Patnaik.

Taking to Twitter, Naveen, however, thanked PM Modi for air connectivity to the Steel City ahead of the FIH Men’s Hockey World Cup scheduled to start on January 13. “Thank Hon’ble PM Shri  @narendramodiji for the support to improve connectivity to the hinterland of #Odisha under #UDAN. It will boost connectivity, commerce & tourism, fulfilling aspirations of people of the region”

In another tweet, he thanked Scindia for all the efforts, especially to coordinate between SAIL and DGCA for the flight service to Rourkela Airport under UDAN. “It will offer seamless connectivity to sports fans coming to celebrate hockey in Odisha,” he added.