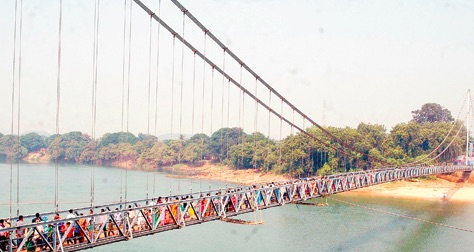 Cuttack: Following the death of over 140 people in Morbi bridge collapse incident in Gujarat, the local administration at Athagarh in Odisha’s Cuttack district has capped the pedestrian limit on the Dhabaleswar suspension bridge at 200.

The decision to allow a maximum of 200 people to take the 254 m long and 2 m wide suspension bridge over the Mahanadi to the island shrine at a time was taken after examination by an expert team from Kolkata.

“As per the recommendations of the expert team, we have reduced the number of visitors on the bridge at a given time to 200,” informed Athagarh sub-collector Hemanta Kumar Swain.

He further said that a maximum of 10,000/12,000 people can be allowed to visit the shrine on a day. “We are also arranging for boats to facilitate the visit of 10,000 more people to the shrine,” Swain added.

Swain advised only those observing Bada Osha Vrat to visit the shrine during the Kartika month. “I would be better if only those who have vrats visited the shrine. General tourists are requested to avoid coming to the shrine at this time,” he said.

He also informed about an all-season bridge, which is under construction and will be completed in three months’ time. “Once this bridge opens, all can come to the shrine any time of the year,” he added.

Meanwhile, the toll in the Morbi bridge collapse incident increased to 141 as of Monday morning. The tragedy took place on Sunday evening when about 400 people were on the suspension bridge over the Machhu river.

Night Temp Falls Below 15°C At Seven Places In Odisha