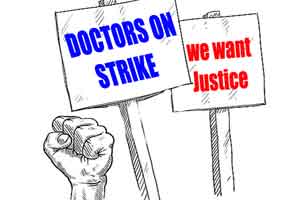 Bhubaneswar: Doctors in Odisha on Wednesday threatened to launch a state-wide agitation and strike work from February 1 if their demands, including Central government pay scale, are not fulfilled.

Despite several rounds of talks with the state government over the demands of doctors, no step has been taken so far to fulfill the demands, leaders of Odisha Medical Services Association (OMSA) said.

Stating that the state government has failed to implement dynamic assured career progression (DACP) for the doctors, they said doctors in the state have decided not to participate in executing national programmes till the fulfillment of their demand.

Accusing the state government of having cheated the doctors by giving promotion to some, they said young and talented doctors are not showing interest to join the state medical service because of uninspiring remuneration.

The state government must accept the main demand of the doctors and implement the Central government pay scale in order to make it lucrative and attract talented people.

This apart, the doctors are demanding withdrawal of the condition of mandatory service for specified period in the undivided KBK region for the overall intest of the health care sector in the state, they said.

Seeking immediate steps by the state government to fulfill the demands at the earliest, OMSA functionaries said the doctors have decided to wait till the completion of the FIH Men’s Hockey World Cup 2023 being held in the state for a positive response on the issue.

However, the doctors will launch a state-wide strike from February 1 if the government fails to take any action to meet their demands, they added.