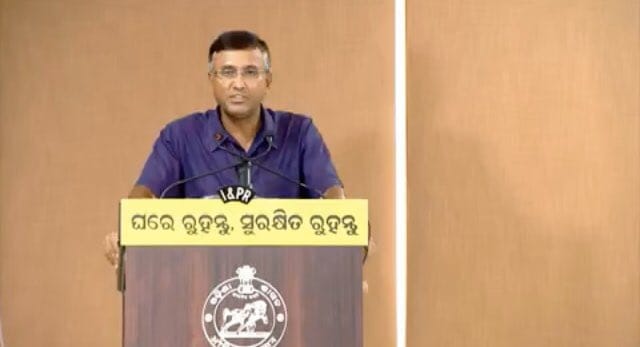 Bhubaneswar: The state government is not going to extend the 48-hour shutdown in Bhubaneswar as no threat of community transmission of coronavirus was found in the city, Chief Secretary Asit Tripathy said on Sunday.

After the Surya Nagar and Bomikhal cases, the state government had apprehended that these were instances of community transmission and declared the two areas as containment zones. Consequently, the government had ordered the shutdown of the entire city till 8 pm on Sunday.

“The motive behind the shutdown was to investigate whether the outbreak of the virus in the city was due to community transmission. However, during the investigation, it was found that there is no community transmission in the city as the two cases have linkage to other states. While the Surya Nagar case is linked to Kolkata, the Bomikhal case is linked to Bhopal. This was the major advantage the state government had during the shutdown,” Tripathy told the media.

The chief secretary said as such cases have been reported in other areas outside Bhubaneswar and Cuttack, the government will identify these places and other hotspots and declare them as containment zones. The government will enforce the World Health Organization (WHO) guidelines to stop the virus from spreading to other areas by conducting door-to-door services in these zones, he said.

“The purpose behind the declaration of containment zones is to avoid shutdown. Now, we have decided to continue with the containment plan for 7-10 days in accordance with the Chief Minister’s directive and government strategy. Professional staff will conduct the surveillance,” he said.

He also said that though the shutdown will be lifted at 8 pm in Bhubaneswar, Cuttack and Bhadrak town, the respective district administration and municipal corporation authorities will identify the hotspots in these areas and declared them as containment zones.

Stating that although grocery, medicine and fruits and vegetable shops will remain open after 8 pm, Tripathy said the lockdown guidelines framed by the state government will remain in force.

He said people should not rush to nearby markets to purchase essential items as the markets will remain open from morning till 6 pm during the lockdown period.

Justifying the move, Tripathy said investigation has revealed that in 80 per cent cases, the people who have been afflicted with the virus are found asymptomatic. “If we don’t abide by the guideline, we will lose the shutdown benefit and infect our family members and those having poor immunity, he observed.

The chief secretary thanked police for ensuring the strict implementation of the shutdown order, the districts collectors and officials for showing their professionalism and people for extending their unstinting support.