Bhubaneswar: Following a decrease in the flow of water, Hirakud Dam authorities closed four more gates of the reservoir on Friday. Floodwaters are currently being discharged through 24 gates, the Special Relief Commissioner (SRC) PK Jena tweeted. 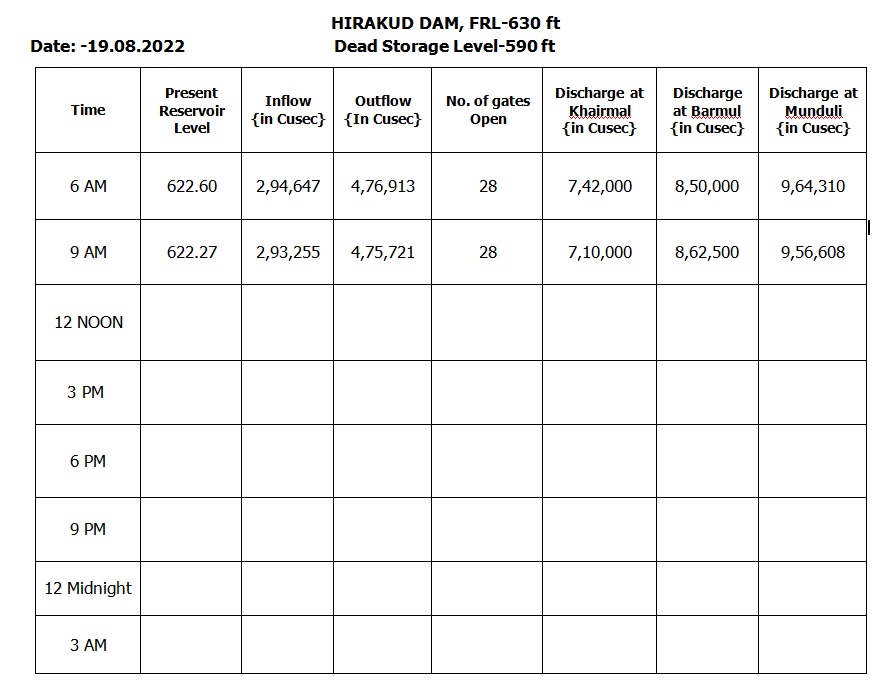 “We are trying to keep the waterflow near Mundali around 7.5-8 lakh cusec. In view of the rain forecast in Brahmani and Budhabalanga basin, water from Mayurbhanj and Keonjhar reservoirs was released as a precautionary step. Since more rains have been predicted on August 20-21, decisions will be taken in accordance with the situation,” Engineer-In-Charge (EIC), Water Resources Department, Bijay Mishra told the media.

A total of 16 gates have been closed since Thursday when floodwaters were being released from 40 gates amid heavy downpour in the upper catchments of the Mahanadi following back-to-back low pressure over the Bay of Bengal.

The SRC had then said that efforts are on to bring down the water level in Hirakud reservoir to 622 ft by Friday evening.

Meanwhile, the fresh low-pressure area over the Bay of Bengal has concentrated into a depression and is to intensify into a deep depression in the next six hours.

According to the India Meteorological Department (IMD), the system is likely to cross West Bengal and Odisha coasts between Balasore and Sagar Islands by Friday evening. “After landfall, it would continue to move west-northwestwards across north Odisha, West Bengal and Jharkhand towards north Chhattisgarh and weaken gradually,” it said.

Red warning for heavy to very heavy rainfall (7 to 20 cm) has been issued for a few places with isolated extremely heavy falls (>20cm) in Keonjhar, Bhadrak, Balasore and Mayurbhanj districts till 8.30 am on August 20. A few places over Kendrapada, Jagatsinghpur, Cuttack, Dhenkanal, Angul, Deogarh, Sundargarh, Sambalpur, Sonepur, Boudh, Balangir and Jajpur districts are also likely to experience heavy to very heavy rainfall (7 to 20 cm). Heavy rainfall (7 to 11 cm) is very also likely at isolated places in  Jharsuguda, Bargarh, Kalahandi, Kandhamal, Ganjam, Nayagarh, Khurda and Puri districts during this period.