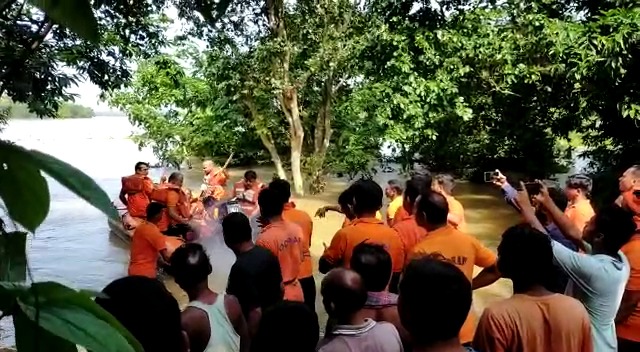 Bhubaneswar: A four-day ordeal of a man and his son ended when they were rescued by Odisha Disaster Rapid Action (ODRAF) personnel on Wednesday after remaining trapped in an isle in the swollen Mahanadi river in Cuttack district.

The man said he along with his son had gone to the Amangei Kuda near Kandarpur in Athagarh area four days ago for grazing their goat but were unable to return after the water level in the river with strong current continued to rise rapidly.

They were stranded in the small river  island due to sudden rush of flood water which engulfed the area.

“We were helpless. We have a small hut in that place and we go there by boat quite often for grazing our goat. However, this time we got stuck as the river is in spate. Our food got exhausted two days ago and we had to remain hungry,” he said.

“Now we are happy … our ordeal has come to an end,” he said.

On getting information about the incident, a five-member team of ODRAF rushed to the site with a power boat to rescue the stranded father-son duo. “”We had to face much difficulty in reaching the place due to strong current in the river water. However, we managed to carry out the operation and rescued both successfully,” said a team member.

Agriculture Minister Ranendra Pratap Swain, who visited the site after the ODRAF team rescued the father-son duo, said all arrangements are being made for proper health check up of the two.

The Minister also offered oral re-hydration solution to the rescued duo and said they will be offered all necessary assistance.