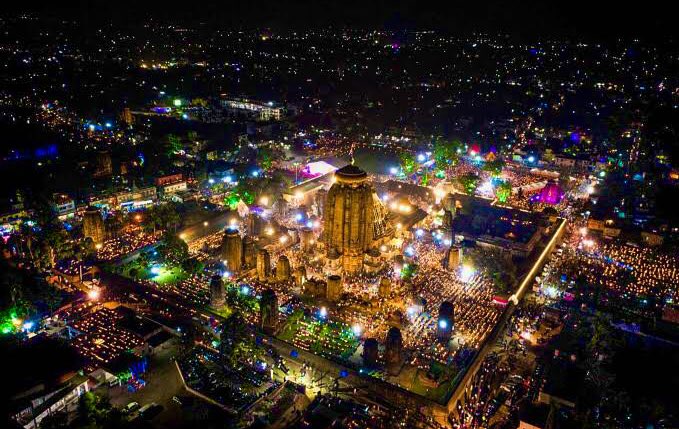 Bhubaneswar: Responding to the Centre’s objection to an ordinance introduced in 2020 proposing changes to Lingaraj Temple complex in Bhubaneswar, the Odisha government has clarified that there is no violation of law and it is only aimed at streamlining the day-to-day management of the 11th-century shrine.

As the ordinance covers 12 Centrally-protected monuments, including the Shri Lingaraj Temple and three ancient tanks, the Centre is of the opinion that it is outside the “legislative competence” of the state legislature and could lead to conflict with the AMASR Act.

In a letter to the Union Home Secretary, Chief Secretary Suresh Chandra Mahapatra said that a new provision in the shape of sub-Clause (4) has been proposed to be inserted in Clause 4 of the Ordinance, taking into the suggestion of the Centre.

“Notwithstanding anything contained in this Ordinance, the Temple tanks and other sacred places including maths as specified in the Schedule to this Ordinance which are declared as of national importance under the Ancient Monuments and Archaeological Sites and Remains Act, 1958 shall be managed and maintained in consonance with the provisions of that Act. In view of the aforesaid insertion as suggested, the provision contained in the Ordinance as such will not violate any of the provisions of the AMASR Act, 1958 rather the purpose of the Ordinance is to regulate the day to day management of Shri Lingaraj Temple and the other Temples and properties of the said Temples as it is a living temple and large number of devotees visit daily,” he said.

He further added that the Minister of Law & Justice (Legislative Department) in their letter dated April 8, 2022, had no objection to the promulgation of the Ordinance.

Regarding provision for shops inside and outside the temple, the Chief Secretary said that these are essentially meant for selling worship materials and exist since time immemorial. “The Ordinance intends to minimise the number and regulate the shops and they are in no way inconsistent with the character of the monument and in no manner contradict the AMASR Act,” he wrote.

They are about eight such shops inside the shirne and another 115 outside the complex.

Responding to the Centre’s objection to the ordinance’s clause, which provides for special darshan on payment of fee, as it violated the existing agreement between ASI and temple management; which stipulates the public “would have free access to the monument”, Mahapatra said that it only applies to ‘special worship, service, ritual or ceremony’ and will not affect free access of the public to the temple.

“Work will only be taken up to preserve and protect the properties of the temple, safety of the pilgrims and devotees, smooth performance of Nitis etc. For example, the administration can spend for temporary shedding, drinking water, sanitation etc during rukuna Rath Yatra of Lingaraj Temple,” he clarified.

The correspondence between the Centre and the state government over the ordinance is going on for the last one year and this was the third time that a clarification was sought.

In 2019, the state government unveiled Rs 700 crore. Ekamra Kshetra Development project to preserve the heritage and culture of the “temple city” and develop nine sites. A year later, the Naveen Patnaik-led Cabinet approved an ordinance to bring the Lingaraj Temple and eight other associated temples, under the control of the Lingaraj Temple Managing Committee, similar to the one for Jagannath Temple in Puri. It is currently covered under the Odisha Hindu Religious Endowment Act.

Know The Size Of The Largest Known Plant On Earth!