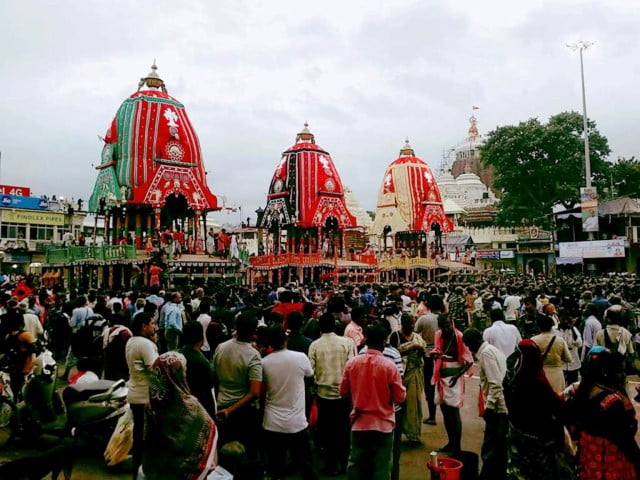 Bhubaneswar: The state government continues to maintain a stoic silence on Rath Yatra in Puri amid clamour for its decision by Nijogs and servitors of Jagnnath Temple besides opposition parties and after the Orissa High Court suggestion of pulling of chariots by machines or elephants due to COVID-19 situation.

A Division Bench of the High Court comprising Chief Justice Mohammad Rafiq and Justice Biswajit Mohanty, while disposing of two PIL writ petitions earlier this week, had observed that if the government decides to hold Rath Yatra, it must consider deploying machinery or other means like elephants to pull the chariots.

“We are inclined to observe that deploying heavy-duty machinery or any other means like elephants than the manpower for pulling the chariots would obviously obviate the necessity of involving a large number of persons, which number could be in many hundreds”, the court observed in its June 9 order.

But the servitors of Jagnnath Temple in Puri are not very favourable to the court suggestion. “We had seen pulling of chariots by elephants but don’t know whether it is possible now,” said Suddha Suar Nijog secretary Premananda Das Mohapatra on a cautious note.

The issue has also taken a political colour with opposition BJP in the state making it an almost daily agenda to make a demand for the government’s decision. Party leader Prithviraj Harichandan has even gone to the extent of saying that the state government is trying cancel the Rath Yatra.

Even as the Orissa High Court has left it to the state government to take a call on the matter that pertains to the sentiment of the people, Harichandan alleged that the government wants to take the judicial way to absolve itself of the responsibility.

On the other hand, BJD legislator Amar Satpathy said the issue should not be politicised as it is a matter of religious significance. The state government is in consultation with the servitors’ bodies, Shankaracharya and Puri Gajapati Dibyasingha Deb and would announce its decision at right time, he added.

Meanwhile, the three chariots are almost complete for Lord Jagannath, Lord Balabhadra and Devi Subhadra. The car festival is scheduled to be held on June 23.

COVID-19: WHO Retracts Statement, Says Asymptomatic Patients Can Cause Around 40% Of Transmissions

Tale Of 2 Overs: Spinner Bags Hat-Trick, Then Gets Hit For 6…

Good News For Working Class: No Cut In PF Interest Rate, To…