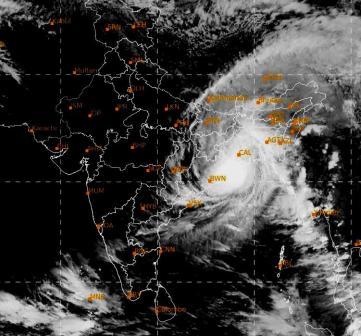 New Delhi: The India Meteorological Department (IMD) has released a report on Amphan which made landfall at Sundarbans in West Bengal on May 20, categorizing it as a Super Cyclonic Storm (SuCS) — the first of its kind over the Bay of Bengal since Odisha was hit by the 1999 SuCS.

Having originated from the remnant of a low pressure area over south Andaman Sea and adjoining southeast Bay of Bengal on May 13, it concentrated into a depression on the morning of May 16 and intensified into a deep depression the same afternoon.

It weakened slightly over west-central Bay of Bengal on May 19 and crossed West Bengal- Bangladesh coasts as a VSCS during 1530-1730 hrs IST on May 20, with maximum sustained wind speed of 155-165 kmph gusting to 185 kmph. It lay over West Bengal as a VSCS, gradually moving north-northeastwards during late evening to night that day. It moved very close to Kolkata during this period.

IMD monitored the system since April 23, about three weeks prior to the formation of the low pressure area on May 13. The cyclone was monitored with the help of available satellite observations from INSAT 3D and 3DR, polar orbiting satellites including SCATSAT, ASCAT etc. and available ships and buoy observations in the region.

From midnight of May 18, till May 20, the system was tracked by IMD Doppler Weather Radars (DWRs) at Visakhapatnam, Gopalpur, Paradip, Kolkata and Agartala.