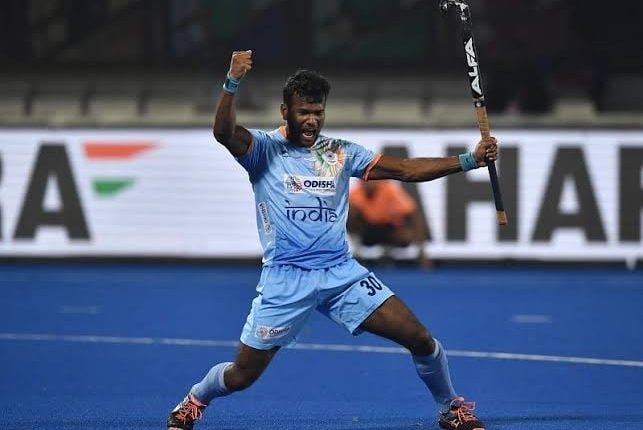 “Amit is the silent hero. He managed to stop 15 penalty corners. It’s difficult to stop a ball approaching at 200 kmph. Goalkeeper Sreejesh PR is the backbone of this Indian team,” said the former Indian goalkeeper.

Former Olympian from Odisha, Dilip Tirkey said: “What we couldn’t achieve has been fulfilled today. History has been created. Two Odisha players – Amit and Birendra Lakra – winning bronze at the Olympics is a big achievement,” he said.

He was also all praise for Amit, the 28-year-old first time Olympian. “He has been performing brilliantly,” he told Odisha Bytes.

His success as the first-rusher eased the job of goalkeeper Sreejesh during the Olympics matches, he added.

Interestingly, three retakes were given following some brave blocking by Amit, which stopped Germany on their tracks.

Both Dilip and Amit hail from Saunamara village in Balisankra block of Odisha’s Sundargarh district.

Besides stopping penalty corners, the Indian defender had almost come to scoring a goal at the opening hockey match against New Zealand at the Tokyo Olympics. India won the match 3-2.

Amit joined Panposh Sports Hostel in Rourkela (2004) to hone his hockey skills. He was initially a forward, but Bijay Lakra – his coach at Sports Hostel, Panposh — advised him to switch to defence because of a good physique and capacity to take the load.

He proved his coach right. Within a couple of years, he became a regular member of the Hostel as well as the state team.

“You guys did something which we only dreamt of. CONGRATULATIONS Graham and the entire team for the medal. It’s a gift we will never forget throughout our lives.
THANK YOU, BOYS,” another former Olympian from Odisha Lazarus Barla wrote on his Facebook timeline.
Meanwhile, Odisha Olympic Association has announced a cash reward of Rs 1 lakh each for the two hockey players from Odisha, who were part of the medal-winning team.
Share FacebookTwitterGoogle+ReddItWhatsAppPinterestEmail