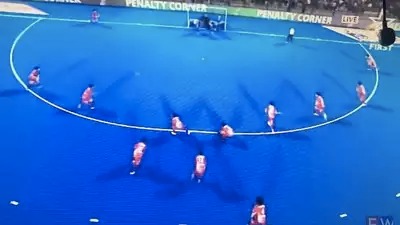 Bhubaneswar: The Pool B match of Men’s Hockey World Cup between South Korea and Japan at Kalinga Stadium in Odisha capital witnessed a bizarre incident as 12 players of Japan took to the field during a penalty corner set-piece in the dying moments in what seems to be a desperate bid to level the score.

Japan had withdrawn their goalkeeper in the last two minutes for an extra man up front, but the number still exceeded the regulatory 11 players on each side. The scorecard then read 2-1. Korea, however, won the match as Japan was unable to convert their last penalty corner.

Meanwhile, the International Hockey Federation (FIH) has released a statement, saying they are “currently investigating” the incident.

“After the match, the FIH Officials – who have not spotted this situation at the moment – have spoken to the Japanese team who have explained that they hadn’t realised this at all and expressed their most sincere apologies,” the FIH said, adding that they have also explained the matter to the Korean team.