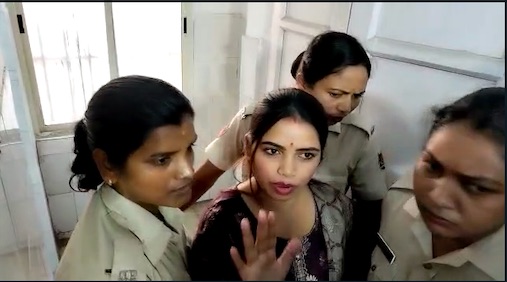 Bhubaneswar: The Enforcement Directorate (ED) on Tuesday took Archana Nag, accused of honey-trapping influential people and extorting money from them, on remand for seven days. She was shifted from Jharpada Special Jail to Capital Hospital for a medical check-up before being taken to the agency’s office for interrogation.

“I was waiting for ED. I will fully cooperate in the probe,” Archana told the media outside Capital Hospital

She also tried to strike an emotional chord by mentioning her five-year-old son.

Responding to media queries, Archana said she has been trapped. “I need sufficient time to speak, at least 30 minutes. If I speak, the entire scenario in the state will change. I will give all ‘exclusive’ evidence, and will not spare anyone,” she said while indicating involvement of many influential people in a sextortion case.

Archana also slammed the Commissinerate Police over the way she was detained at Balianata police station for over 60 hours and later arrested. “I am not a terrorist. Police refused to divulge the offence under which I was detained. The way I was arrested and my family was harassed by the Commissionerate Police, it’s all conspiracy against me,” she said.

She also blamed her former close aide Shardhanjali Behera, film producer Akshay Parija and another person named, Daisy, for her predicament. She challenged Shardhanjali to come out with proof against her.

Both Shardhanjali and Parija had lodged complaints against Archana at Khandagiri and Nayapalli police stations respectively.

Shardhanjali had said that she was used by Archana in the racket. She was interrogated for about 12 hours by ED on November 25 in connection with the extortion of Rs 3 crore from Parija, who had alleged that Archana and Shradhanjali had demanded the amount from him in October while threatening to release his intimate videos.

The ED is probing the proceeds of the crime and has so far grilled about nine people in connection with the case registered against Archana, her husband Jagabandhu Chand and their associates under Prevention of Money Laundering Act.

Earlier in the day, Ranjit Behera, the architect of Archana’s house, deposed before the agency, which also questioned contractor Pabitra Patra the previous day.

The 26-year-old allegedly amassed Rs 30 crore assets, including a 3-storey palatial bungalow at Satya Vihar, in just over four years.