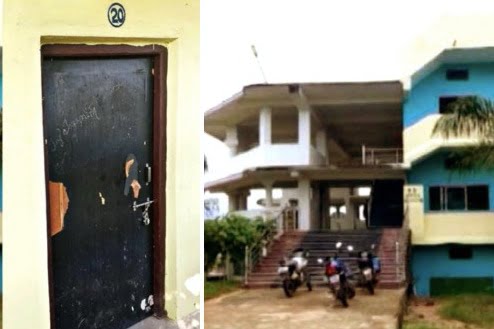 Balangir: With Govind Sahu, the main accused in the sensational murder of schoolteacher Mamita Meher, sent to jail after the end of his five-day remand period, the focus has now shifted to room no-20 at the ladies hostel of Sunshine English High School at Mahaling in Odisha’s Kalahandi district.

It is being alleged that Sahu operated the sex racket from this secret room. The door lock, which is different from the other rooms of the hostel, has further thickened the plot.

Sahu allegedly had gone to the room multiple times between October 8 and October 13. It is suspected that he might have cut open the lock to destroy evidence and later put a new lock. He also allegedly deleted CCTV footage of his visits to the hostel. There is a CCTV control room in the hostel to track the movement of the girl, media reports said.

Meanwhile, two girl inmates of room number 20 have been summoned by police for questioning. They were said to be close to the deceased schoolteacher.

There were only two beds and a rack in this room while other rooms in the hotel had around 8 beds each. Mamita reportedly stayed in this room along with another student, whose phone was recovered from the house of Sahu’s drive Radheshyam Chandi, the reports added.

Police might also bring Radheshyam on remand for questioning.

The Opposition Congress and BJP have been accusing Sahu of running a sex racket from the school’s ladies hostel premises. While demanding the resignation of Minister of State for Home Dibya Shankar Mishra for his close links with Sahu, they further alleged that he used to frequent the hostel.

However, several questions in the case still remain unanswered.

1. Is police investigating only the death of Mamita or also the ‘unethical’ activities of Sahu?

2. Who helped Sahu commit the murder?

3. Who was behind Sahu’s escape from the police barrack at Titlagarh?

4. Why was he detained there for five days?

5. Why funds were allocated to the college run by Sahu from WODC funds.

The remains of Mamita was recovered from Mahaling Stadium on October 19, 11 days after she went missing. Sahu was nabbed from a sugarcane field at Budhipadar village in Balangir the same evening.

Police later claimed that Sahu killed Mamita as she had threatened to expose his extra-marital affair.

Eggs Hurled At Carcade Of BJD Leaders In Odisha’s Kalahandi

17-Yr-Old Suffers Major Burns Due To Alleged Negligence Of TPWODL; Pleas For…