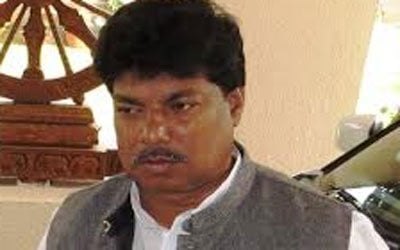 Baripada: If harassment allegations against Patnagarh MLA Saroj Meher and Kendrapara MP Anubhav Mohanty were enough, another BJD leader has kicked off a storm by equating himself to Badam, the Goodess of Bathodi community, and Chief Minister Naveen Patnaik to Lord Jagannath.

Here, we are talking about Revenue and Disaster Management Minister Sudam Marandi. He reportedly made the statement in a meeting on Wednesday with reference to the ‘padyatra’ by the servitors of Haribaldev Jew Temple from Baripada to Bhubaneswar, seeking fulfillment of their eight demands.

What the minister meant was that the aggrieved servitor should have met him first since he is their elected leader before proceeding to Naveen Niwas. However, he is drawing brickbats for the statement, which has gone viral on social media, with many accusing him of having become arrogant, reported the New Indian Express.

Stating that the demands of the servitors are genuine and justified, BJP district president Krushna Chandra Mohapatra termed Marandi’s statement as shameful.

District Congress President Hemanta Das said that power had gone to his head since being sworn in as minister for the second time.

JMM leader Kalinga Keshari Jena said that the statement did not suit a leader of his stature.

Check Your Plus II Arts, Commerce Results Today! Here’s How