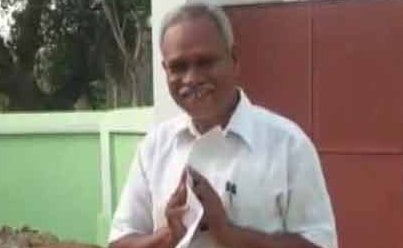 Bhubaneswar: Phulbani legislator Angada Kanhar was among the students, who took the annual matric examination which began on Friday in offline mode.

The 56-year-old appeared for the second language paper at Rujangi High School at Pitabari village under Phulbani block in Kandhamal district. He had discontinued studies in 1978. “I was not able to complete Class X due to different family issues. Recently, I learned that many have appeared for exams even at the age of 50 and more. So, I decided to take the board exams. There is no age barrier to appear for exams or to get educated,” said Kanhar.

The MLA was encouraged by members of the panchayat and his driver to take the test.

He entered the exam hall like other candidates after getting his admit card verified and sat for the test along with his two friends, among whom one is a Sarpanch.

“I don’t know whether I will pass the test or fail. But I wrote my paper with the intention of getting a matriculation degree,” he added.

The exam being conducted by the Board of Secondary Education (BSE) began at 8 am amid tight security. A total of 5,71,909 students are appearing for the High Certificate Examination (HSC) exam while 9378 and 4443 students are writing for State Open School Certificate Examination (SOSC) and Madhyama exams, respectively in 3,540 centres. The exams will continue till May 6.

While the duration of the exams is 8 am-10 am, the timing of some of the examinations is less than two hours and will be completed by 9 am or 9.30 am. Only the Mathematics paper will continue till 10.15 am.

In view of the heat-wave condition, uninterrupted power supply and availability of drinking water have been ensured at all centres. First-aid treatment facility has also been made available.

To check malpractices, 38 special squads have been formed by the Board and 65 flying squads at the district education officer (DEO) level. All district administrations have been asked to send squads to supervise examinations within their jurisdiction.

Notably, he had taken his Class VIII exam after he was elected to office as an MLA.

He had also grabbed headlines last year for sticking to his farming background while continuing his role as a legislator.

Kanhar started his political career in 1985 and was elected sarpanch of Kerandibali panchayat three times and once of Pakari panchayat.  He went on to hold the post of chairman of Phiringia block and Zilla Parishad member of zone 13. In 2019, he was elected as the MLA of Phulbani from the reserved (ST) seat on BJD ticket.

“We are conducting SIOS exams at our centre for those who had to leave their studies midway for any reason. A total of 63 candidates, including Phulbani MLA and Sarpanch, appeared for the exam at our centre,” Headmistress of Rujangi High School Archana Bas said.

More Access Points For Free Wi-Fi Service In Bhubaneswar Go Live; Check How To Use It