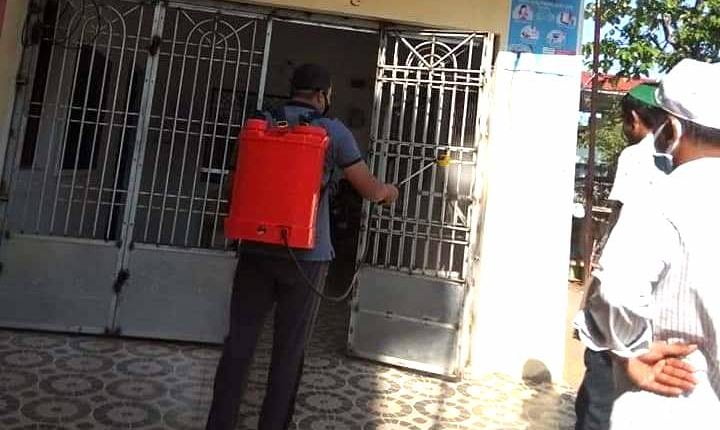 Berhampur: An OAS officer’s relentless fight against coronavirus has won the hearts of the people in Ganjam district.

Tanmay Patra, the Block Development Officer (BDO) of Buguda, has set an example by his commitment to follow safety standards. The young officer not only sanitizes his office every day, but also carts a sanitizer liquid pack on his back and goes on spraying the entire block office before resuming work. He also sanitizes the Panchayat Samiti office in presence of all the staff.

Apart from this, his role in taking care of the migrant Odia workers at the government quarantine centres in his block has also won all round praise.

For instance, after working till late evening on Friday, Patra left for home. He, however, However, he skipped dinner and again left his home at 11 pm following information about the arrival of a bus carrying migrant workers at Manitara. After escorting the bus to a temporary health camp (TMC) on the Manitara College campus, he supervised the health check-up of each migrant worker and their stay at the camp.

Again on late night Saturday, Patra went to the Kholakhali panchayat to oversee the stay of 22 migrant workers of Buguda and Polasara blocks at a TMC at Talasakara.

After learning that these migrants were provided with only one meal a day at the TMC, the BDO sent Rs 2000 to the migrant workers through a messenger and made arrangements to provide them with food after informing the district administration.

Fire Breaks Out At Samaleswari Temple In Sambalpur