Bhubaneswar: Odisha has retained its first position in the country in effective implementation of Atal Mission for Rejuvenation and Urban Transformation (AMRUT) scheme.

According to the ranking of the states released by the Ministry of Housing and Urban Affairs, Odisha has topped the list by securing 85.67 per cent of marks. Chandigarh and Telangana have secured second and third positions with 75.08 and 74.04 per cent respectively.

Several developed states have been relegated to lower ranks in implementation of the Central scheme, as per by National Level Rating Framework assessment.

The states which are in top 10 list include Gujarat, Karnataka, Andhra Pradesh, Mizoram, Madhya Pradesh, Chhattisgarh, and Andaman and Nicobar Islands. Last year, Andhra Pradesh was in the second spot. 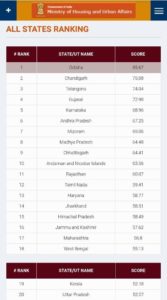 Odisha spent Rs 1025.56 crore out of Rs 1704.39 crore worth projects awarded to it under the scheme during the last year, the ministry stated.

743 Employees Of Tirupati Temple Have Tested Positive, 3 Died Since Reopening