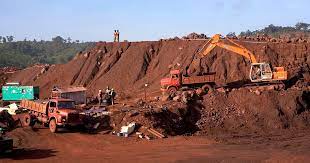 Jajpur: Fine totaling Rs 105.13 crore has been imposed on four leaseholders for excess mining of black stone at mines under Dharmasala tehsil in Odisha’s Jajpur district.

Minor minerals like black stone, murram, sand and soil worth crores of rupees are being smuggled from the area regularly to different places in and outside the district, sources said adding that illegal and excess quarrying is carried out in the name of lease and by using temporary transit permits, causing huge loss of revenue to the state Government.

Following allegations about illegal and excess mining than the allotted volume, revenue officials carried out measurement of actually mined area of four mines using drones and other gadgets, they said.

After detailed physical probe, one lessee was found to have carried out the highest excess mining at black stone quarry in a mine under Lunibari mouza. He has been fined Rs 63.37 crore, sources said adding another lessee was fined Rs 23.32 crore for the excess mining at a quarry Dankari mouza. The other two were fined Rs 16.57 crore and Rs 1.87 crore respectively.