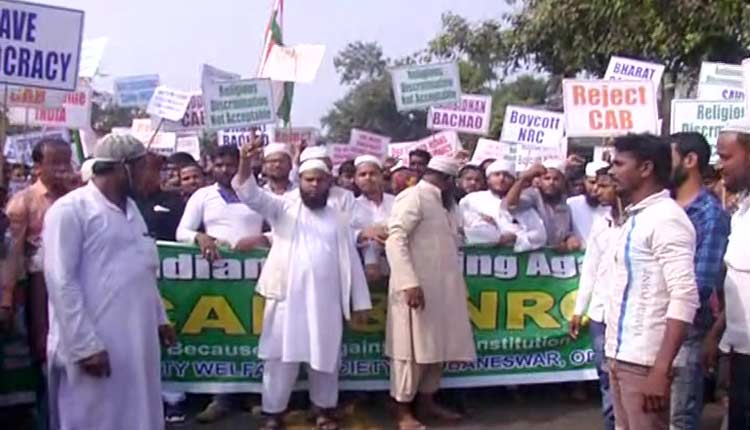 Bhubaneswar: The protests against the Citizenship Amendment Act (CAA) spilled onto the streets of Odisha capital on Tuesday with members of the Muslim community taking out a peaceful rally.

They were accompanied by practitioners of other faiths, including Hindus.

The protestors wearing black ribbons and holding placards marched from Satya Nagar Masjid at 11 am, demanding revocation of CAA. It culminated near Sishu Bhavan Square. They raised slogans like, “CAA down down, NRC down down”.

They later submitted a memorandum to Chief Minister Naveen Patnaik, conveying their apprehensions over the CAA and proposed legislation for nationwide implementation of the National Register of Citizens (NCR).

“We condemn CAA and demand that it be revoked. We respect the Constitution and will always protect its sanctity,” said General Secretary Jamiat-Ulama-i-Odishaof Sayad Naquibul Amin Barki.

He said that the CM should oppose the CAA in public and support their agitation. “Our silent protests against CAA will continue in different parts of the state,” Barki added.

In the memorandum, the protestors reminded Naveen of his father Biju Pattnaik’s legacy and his secular credentials. The also stressed Naveen’s 2009 statement when he said “My every single Bone is Secular” while addressing the media.

On Monday, members of Muslim community had gathered in front of Cuttack District Collectorate to protest against CAA And NRC, arguing that it was against their people and could erode the secular fabric of the country.

Ironically, members of the ruling BJD had supported the the contentious Citizenship (Amendment) Bill (CAB) in both Lok Sabha and Rajya Sabha. It had brought the Naveen Patnaik-led party’s ‘secular credentials’ under the lens, for the first time.

BJD’s backing the passage of the Bill in both Houses had raised eyebrows in political circles over not just its increasing bonhomie with the BJP but also its perceptible shift in ideological stand rooted in secular values.
Naveen had later met some Muslim leaders and assured them that NRC would not be implemented in the state and allayed apprehensions over the safety of their community after the Citizenship (Amendment) Act.
BJD minority cell general secretary Dilshan Sekhar and several other members within the party minority cell of Balasore district had, however, told the media that they feel like they have been betrayed by their own party.
CAAMuslimNRCodisha
Share FacebookTwitterGoogle+ReddItWhatsAppPinterestEmail