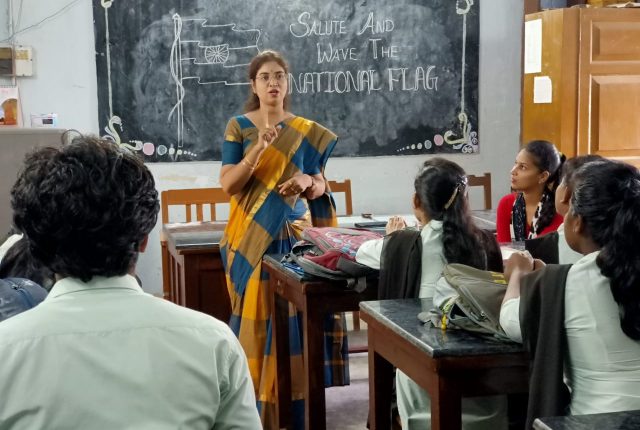 Berhampur: A college teacher in Odisha’s Berhampur city has launched a campaign among students about the complete process of hoisting of the National Flag and the steps to be taken for preventing any disrespect to it.

Recently, people across the nation participated in the ‘Har Ghar Tiranga’ campaign under the aegis of Azadi Ka Amrit Mahotsav to mark the 75th year of India’s independence. People hoisted the Tricolour atop their houses.

“The Central Government began Har Ghar Triranga Abhiyan to instill nationalism and patriotism among the countrymen. From August 13 to 15, people hoisted the Tricolour atop their houses, business centres and institutions and the campaign was successful. But we forgot how to respect the National Flag afterwards,” said Usharani Brahma, Zoology Department head of Ram Narayan Degree College on the outskirts of Berhampur.

She said lack of awareness about the entire process of hoisting the National Flag led to its disrespect. While it was found to be torn in some places, twisted at another or the mast holding it had bent at the other. “We need to know how to bring down the Tricolour after hoisting it in an event and preserve it for next occasion so that it does not lose the pride place it deserves,” she added.

On the occasion of Teachers’ Day, Usharani began a campaign to raise awareness among the students about importance of the National Flag. As part of the campaign, Usharani displayed the post-hoisting process of the Tricolour. She also advised them that wherever they would find a National Flag in a state of disrespect, they should take steps to rectify it. The drive was initiated in Berhampur for the first time on Monday.

It is worth noting that Usharani also works towards creating awareness about traffic rules, animal sacrifice, superstitions and women’s rights.

Rain To Continue In Bhubaneswar, Cuttack & 13 Odisha Dists For Another 3 Hours