Odisha: This Upper Primary School In Nuapada Cries For ‘Transformation’

Nuapada: Even as the state government has embarked on providing modern facilities  to the schools under the 5T School Transformation programme, some schools remain deprived of basic infrastructures like a safe building.

The case in point is Kendupati Upper Primary School under Khadial block of Nuapada district. The beautifully decorated boundary wall of the school gives a false impression of all is good impression inside. For, more than 60 years old school building is crumbling and the students have to attend classes on the verandah.

The school was started as a primary school in 1959 with four rooms. The students were admitted upto Class V till 2017 when it was upgraded to upper primary level as Classes upto VIII were opened.

Even as the school has around 290 students on its roll and six teachers have been appointed to take the classes, no step has been taken to construct a new building for additional classes till date. 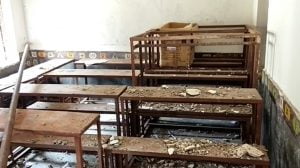 Speaking to the media, the school’s in-charge headmaster Deb Kumar Banchhor said out of total four rooms in the building, two are in dilapidated condition. “As the chunks of concrete plaster have dropped from the ceiling in the two classrooms, we have shifted the students to verandah to attend classes keeping their safety in view,” he said.

Things have worsened after the students of Classes VI and VIII were allowed to attend physical classes following relaxation in COVID restrictions by the government. “Due to lack of space, we are constrained to violate the COVID protocols and allow the students of two classes to study in one room in a cramped condition,” said the headmaster.

Stating that repeated pleas of the school authorities to higher officials have failed to elicit any response, Banchhor said the building is no more safe for the students as well as the teachers.

“Minor repair of the structure will not serve any purpose. We demand construction of a new school building for the students to pursue their studies in a safe and assured environment,” said Jhumaklal Bag, a guardian of a student of the school.

Speaking on the condition of the school, the education authorities of Khadial block said they have sent the list of schools which need repair of buildings to respective panchayat offices. The repair work has started and Kendupati school will be covered soon, they added.