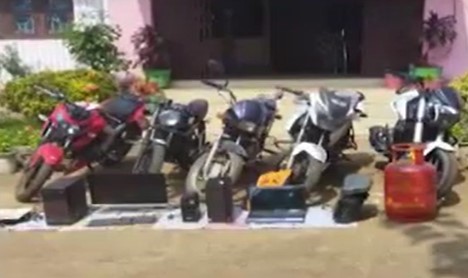 Berhampur: Odisha police apprehended a gang of thieves at Chamakhandi and Chhatrapur block in Odisha’s Ganjam district on Thursday.

According to sources, Chamakhandi police raided a rented accommodation following a tip-off and nabbed the accused persons, who used to steal costly items to collect money for buying expensive gifts for a girl, the alleged lover of the prime accused Arjun Behera.

His accomplices are aged below 18 years and shared the rented house with him.

They began by stealing milk packets in December last year and then lifted bikes, laptops, desktops, induction cookers, and gas cylinders. “We have seized six motorcycles, a laptop, a desktop, a gas cylinder, and two central processing units (CPUs) from them. Behera was forwarded to the court and the two minors were sent to Juvenile Correction Centre in Berhampur,” IIC Sudeep Kumar Sahu told media.

Biker Crushed To Death, Another Critical By Speeding Truck In Odisha’s Mayurbhanj