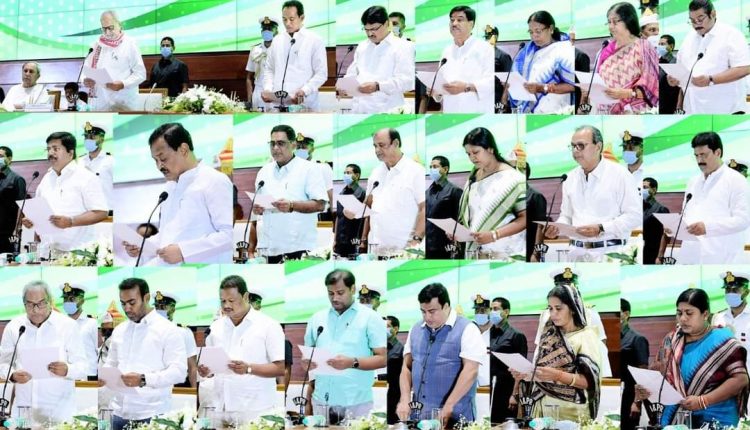 Bhubaneswar: Odisha Chief Minister Naveen Patnaik’s new ministry, which was sworn in on Sunday, has 13 Cabinet ministers and eight Ministers of State (MoS), which include seven new faces and five women.

Governor Ganeshi Lal administered the oath of office to the 21 new ministers at a special ceremony in the new convention centre of Lok Seva Bhawan in Bhubaneswar. In a first, the state Governor arrived at the Lok Seva Bhawan for the oath-taking as swearing-in ceremonies are usually held at the Raj Bhawan.

Jagannath Saraka, a known tribal leader, was the first to be sworn-in as he is named after Lord Jagannath, BJD sources said.

There are seven new faces in the ministry, including Cabinet Minister Rajendra Dholakia.

On Saturday, all ministers in the Naveen Patnaik government were asked to resign, paving the way for Sunday’s reshuffle. Speaker Surjya Narayan Patro also put in his papers. His family, however, said he quit on health grounds.

The reshuffle comes days after the Naveen Patnaik government completed three years of its fifth term in office on May 29.

Ahead Of Odisha Reshuffle, Naveen Orders Closure Of Offices Of 23 Advisor, Chairperson Posts