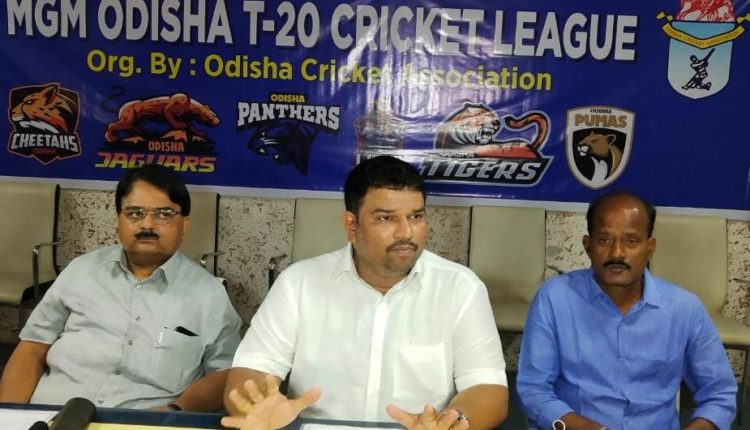 Cuttack: The Odisha Cricket Association (OCA) on Saturday announced the schedule for the T-20 League tournament scheduled to begin at Barabati Stadium from Sunday (December 27).

In a joint press briefing, OCA President Pankaj Lochan Mohanty and OCA Secretary Sanjay Behera informed that the MGM OCL T-20 League is being conducted by the OCA in association with TCM, a major sports management company.

They said the MGM company has obtained the title sponsorship for this event which is being organized in accordance with the permission of the state government. 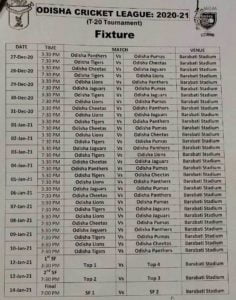 Referring to the measures taken by the OCA in view of the COVID-19 pandemic, the two OCA office-bearers said that a bio-secure bubble has been created. “All the players and officials have gone through the RT-PCR test and only COVID-19 negative will be allowed to participate in this event,” they pointed out.

“The League has been divided into six teams. Each team has two support staff, one coach and one manager. All the teams will play matches on a double leg basis. There will be 30 matches and the top four teams will qualify to the semi-final stage. The team at the top of the League will play against the third top-most position holder in the first semi-final and the second top-most team will play against the fourth top-most team in the second semi-Final match. The winner of the two semi-final matches will play in the final on January 14,” they added.

To conduct the tournament, OCA has appointed 11 umpires and 8 scorers. All the matches will be live-streamed on the “FAN CODE” app.

Flashback 2020: Deaths That Left A Void In Odisha Film Industry